Skip to main content
You are here: Home / What lessons can the women of Bangladesh teach us?

What lessons can the women of Bangladesh teach us?

This summer I had the opportunity to travel to Bangladesh with CARE, an organization dedicated to lifting women and girls out of poverty in developing nations. There, I served as a production assistant for a short documentary on the rights and lives of female garment factory workers.

From abroad, I watched the terrorist acts that took place in Charlottesville, Virginia. The irony was not lost on me as I put forth my best effort to aid the lives of brown women and children in Bangladesh, funded by mainly white and developed nations like the U.S., acts of terror were being committed against our own minority brothers and sisters at home.

There are assumptions made in the States about developing countries — I know, because not only have I been privy to them from my peers, but I have committed a few myself; such as believing almost every man in these nations is sexist. But as I met and interviewed men in the villages and male union leaders, I realized many of them are supportive and active in the fight for women’s full equality in the workplace and at home.

When we are fed one narrative by the systems in power and do not take the time to educate ourselves on it, then this is the problematic narrative we act upon. Our president drums up hate and utilizes fear mongering as he seeks to ban more Muslims from entering the country and keep a record of Muslim citizens. Perhaps if he interacted in their communities or visited a country where 80% of the population practices Islam, he might understand the gentleness of it.

Those who are prejudiced might experience the kindness that was offered to me in a mosque, in the form of an older man extending a pastry to me, unasked, that was meant as an offering to a shrine. They might see the beauty of Arabic as it is used in their art, and not the fear that many have placed on letters they do not understand. They might wake to the sound of prayers and chants drifting through the trees, and understand the truth of Islam is the truth of peace. Perhaps then there might not be acts of violence in the United States against those of us who are Muslim.

Assumptions like these are uninformed and often ignorant, but the truth is no different from the United States’s truth, and that is a message that is often lost in the global narrative.

Humanity is a strange mix of love and suffering, and that is the basis of every society at some level, though each experiences it differently. For example, the exploitation of the poor is concrete everywhere.

Did you know it is expensive to live in the slums? That these small houses with tin roofs take the majority of a garment worker’s salary? Without a living wage, there is no rising above. A job does not equal financial security. As with America, we assume that if you work hard you can rise from poverty, but we ignore the systemic issues that purposefully keep minorities and women down economically, politically, and socially.

Were a woman in the factory to seek to rise above her position, she might be met with laughter, at best. Our heart goes out to her, yet we do nothing to help her sisters in the States, as women of color make typically 54% of what a white man makes. The hypocrisy of the preconceived notion is how events like Charlottesville happen. We cannot turn a blind eye to injustice at home merely because we think other nations are worse off. While they might not match the United States in socioeconomic or political prowess, that does not mean we cannot learn from them and formulate a better understanding of ourselves and our duties as a nation.

After my trip to Bangladesh, I fully believe the success of foreign nations is tied greatly to the "othering" of specific groups in the States, and vice versa. Bangladesh is a developing country because Europe, by expanding their global empires hundred of years ago, reaped the goods and benefits of the nation — rich in product and culture — raped the land, raped women, and placed economic and political holds over the people. Today, they still remain under such nations as we both exploit their labor in factories with abusive conditions for cheap, and pump kilo upon kilo of natural gases into the environment, catalyzing climate change at an alarming rate.

As a particular result of developed nations’ lack of sustainability, thousands of people in Bangladesh, India, and Nepal have been displaced from their homes, went missing, or lost their lives due to unprecedented flooding, at rates never before experienced. The world is on the brink of a climate refugee crisis, and the United States has plans to leave the Paris agreement. The fast fashion industry, which is where Bangladesh makes the majority of its money, is the second greatest polluting industry in the world, utilizing 70 million barrels of oil a year and emitting 10% of global carbon emissions, according to Forbes.

But what happens to these nations is not discussed in the forefront of the American political sphere, even as we face our own unprecedented hurricanes. These countries are not us, nor are they like us, so they get less coverage than if a disaster were to happen in Paris, Barcelona, or Berlin. By extension, attacks like Charlottesville happen because of a longstanding tradition to ignore racism and its perpetual existence in our country. Somehow, being an American citizen still does not make a person “like us.”

We are complicit in the subjugation of garment factory workers in Bangladesh, and oftentimes, fundamentally, we are no better at home. But this is the part where I tell you that these women, like women everywhere, are not weak. We can learn something from these factory women, even if we cannot speak their language.

As CARE and I interviewed the women at the top of an old, crumbling building and journeyed with them to their homes, and I watched hope unfurl. Though we were all surrounded by extreme poverty and the women face so much adversity, the women, one of whom was named Rekka, could not stop smiling and inspiring us to smile with them. The women finally had a chance to speak their truths and about what has happened to them, some fired for becoming pregnant, others facing physical and verbal abuse. They finally had a chance to tell the stories of their empowerment, and how they have found solutions through CARE’s programs.

Though we could not communicate at all and utilized a translator, I met a woman named Afrin that I now consider my friend; we spoke the language of kindness and gratitude. As I just watched the women take care of each other and their families, I saw the most concrete example of true feminism I could find. Not one based on “squad goals” or another marketable trait, but one based on women of color supporting women of color, and taking a direct stand against their abusive bosses and communities, despite the disadvantages they face.

As they stand up to their employers, so can we. By focusing on the narrative that America is the best country in the world, we lose sight of what we can learn, and what we must atone for. It is our duty to stand up for environmental justice, to sexism, to racism, and to prevent something like Charlottesville from happening in the future.

In 2017, the age of hyper globalization, it is time to willingly learn from our mistakes and take a note from the garment factory workers in Bangladesh speaking truth to power. While there are so many other lessons I will take from Bangladesh, on toxic masculinity, gender norms, microaggressions, racism, etc., that I wish I could fit into this blog, I will leave you with the image of Rekka. Strong, a survivor, a provider, and an advocate we can look to in our lives in America. 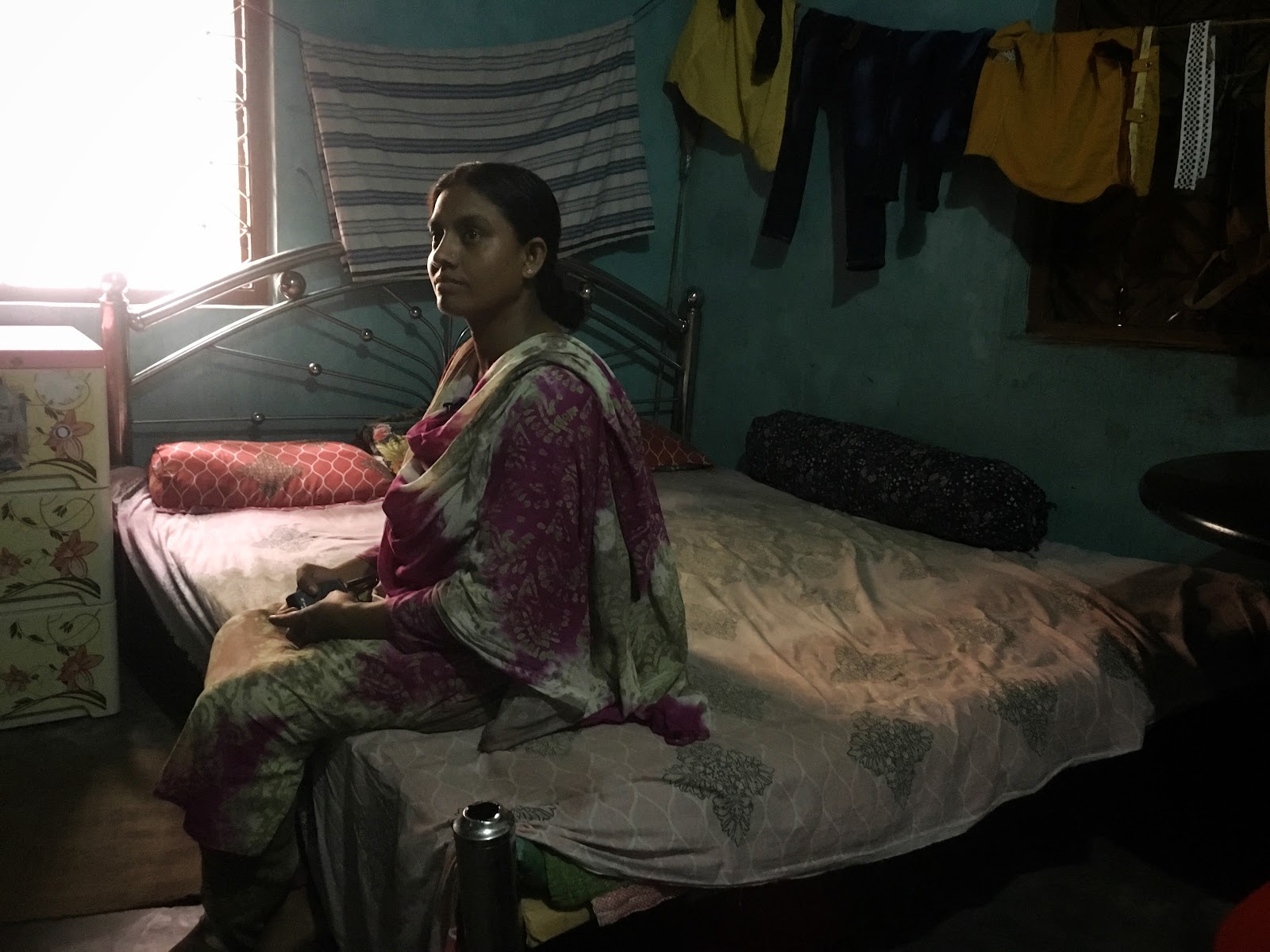 Tags:
clothing, production chain, women, social equality, climate change, pollution, storyfest2018
How do you move the Planet Forward? Tweet us @planet_forward or contribute to the conversation with your own story.

Essay | Microplastics: A well-known threat that isn’t so easy to get rid of

Photo of a collection of microplastic pieces floating in a glass of water. (Courtesy of Laura Markley)

A worker sprays a field with pesticide. (phhere.com/Public Domain)

Hannah Krantz
Planet Forward Correspondent | George Washington University
The tipping point: Researchers look to the past and the future of Earth's climate

A pick-up truck drives through a flooded intersection during the aftermath of Hurricane Harvey. (Jill Carlson/Attribution 2.0 Generic)

A view of the Long Island Sound from my backyard. (Jane Cameron/George Washington University)