Skip to main content
You are here: Home / Shower With Sustainability

There are a few daily activities that people take more pleasure in than a nice, long, relaxing shower. I am without a doubt one of those people. But I recently found out just how much water I was wasting while standing there styling my hair with shampoo and singing 90s hits. Standard showerheads use about 2.5 gallons per minute and some older ones use almost 5 GPM!

Save our water, and save yourself some money.

Check out these 8 things you should and shouldn’t do while you’re taking a shower. 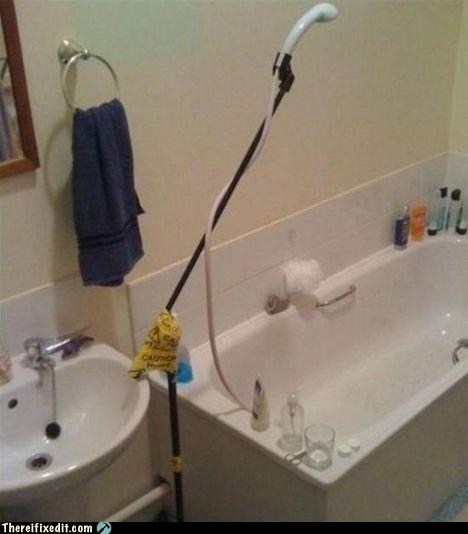 Take a morning power shower. A short five-minute morning shower just to wake you up is a perfect way to start the day. (If you really want a wake up jolt, just before getting out turn the water to cold for a few seconds.)

Rig up your showerhead to double as a microphone. As awesome of an idea as this may seem at first, it leads to longer showers. A few years back, Australians were encouraged to stop singing in the shower in an attempt to conserve water.

Get yourself a low flow showerhead. You can save up to 15 gallons of water during a 10-minute shower.

Definitely don’t do this.

Take a Navy shower. When you’re soaping up make sure to turn the water off and then turn it back on to rinse off.

Don’t let the water go to waste while it is heating up. Capture the cold water in a bucket and use it for other things around the garden.

Find a shower buddy. Nothing could be cuter than having a little friend with you in the shower.

Don’t take baths.  It generally takes about 70 gallons to fill a bathtub with water. It also leaves you powerless against an evil marmot being thrown in the tub with you. Even if you are The Dude.

How do you conserve water in your day to day routine? Willing to shorten your shower, or shower with a friend? Let us know in the comments.

Leor Reef and Matt Seedorff are seniors at The George Washington University majoring in journalism.

Tags:
saving water, water conservation, shower, water usage
How do you move the Planet Forward? Tweet us @planet_forward or contribute to the conversation with your own story.
Related Content Hub:

Hope flows through the heart of Tucson: The Santa Cruz River Heritage Project

This roundabout is a type of green stormwater infrastructure, that collects stormwater for plants and people (Halley Hughes/University of Arizona).

Community people dug the pond to store rainwater and inspire surface water use.

How to conserve water when living in a dorm room.
Barbara Alberts
The George Washington University
Diet and water conservation

How can you conserve water?
Olivia Dupree
George Washington University