Skip to main content
You are here: Home / 5 things you should know about maps, data, and development

5 things you should know about maps, data, and development

Tutorial: How to Use OpenStreetMap

Imagine that you’re traveling across the country, or even across town to visit a friend in an area you’ve never been to. How do you successfully navigate there? For most people today the answer seems obvious: just enter the address into your navigation app of choice and follow the straightforward, turn-by-turn directions. Modern mapping technology even allows you to see a first person preview of what the location looks like online before you begin your journey.

There’s one small hiccup in this invaluable marriage of technology and geographic information, though: the necessary mapping data that powers tools like these isn’t available everywhere. Tools that so many take for granted across the Western world like online map software, and even just the resources needed for a physical map, are severely lacking or wholly unavailable in many developing regions across Africa, Asia, and even areas within the U.S.

OpenStreetMaps (OSM) is a solution to this widespread lack of mapping data. OSM provides a completely open platform to access, view, and add to an ever-growing map of the world. Utilizing the power of crowdsourcing, anyone can easily contribute to the creation of the map online from the comfort of their own home. In a matter of minutes, volunteers can set up an account and begin helping OSM’s effort to map the world. This work is vital because the creation of a map allows governments, organizations, and everyday people to utilize its data to change lives, making healthcare, street safety, and disaster relief — among countless other necessities — more accessible to millions of people.

Map applications like Google Maps or Waze are examples of a Geographic Information System, better known as GIS, that you might use frequently, but not really understand how much is going on in the background. GIS is a method of entering, storing, and displaying geographic data. Once this data is collected in a GIS, it can be used in an ever-growing number of fields including agriculture, engineering, and any other area that remotely utilizes geographic information.

OpenStreetMap is a free, open-source GIS that seeks to create a complete, editable map of the world. If you’re wondering what sets OSM apart from Google and other consumer-geared GIS services, the answer is that the project is public. Think of it like a Wikipedia, but for maps. OSM is a world map for people, created by people. From a consumer point of view, Google Maps is free to use, however private companies like Google force NGO’s, and other organizations and individuals to pay in order to access mapping and GIS data. OSM seeks to remedy this by crowdsourcing its own GIS that is completely free to access across the world.

Since its inception by Steve Coast in 2004, OSM has worked to crowdsource data-mapping across the globe via local and remote means. Volunteers on the ground utilize handheld GPS devices, cameras, and paper notes to collect local geospatial information while others around the world help edit and ready the GIS data remotely on computers. The process culminates in the entry of mapping data, like the marking of buildings and roads, by remote online volunteers. After a quick verification process, the map data is published and then free and open to use by anyone in the world.

The GIS data collected in OpenStreetMaps is used by individuals, communities, governments, businesses, and humanitarian projects for countless activities around the world. Many of these groups desperately require GIS data to fulfill their needs and goals but lack the budget to pay for GIS services like Google. OSM has no fees, and because it is completely public anyone, anytime can help assist in their mission to expand mapping resources for all.

Mapping the world also holds governments accountable. In areas of the world like Western Africa or Southeast Asia with vast expanses of unmapped but inhabited land, communities and the people that live in them are often neglected or forgotten. Expanding mapping coverage and data literally puts these previously unmarked places on a map, and in doing so says to governments and aid groups, “We are here!” History has shown time and time again that unmarked communities are often forgotten in delivery of aid, development of commerce routes, and disaster relief. The simple act of marking a place, with populations ranging from dozens to hundreds of thousands of people, has an impact that cannot be understated.

Take for example the Kibera slum in Nairobi, Kenya. Kibera is home to more than 200,000 people, yet until recently did not appear in detail on any official map. Scanning over the area online, you wouldn’t know it as home to nearly a quarter million people. Empowering the communities within Kibera with mapping resources and technology allowed these people better access to vital services, and improved recognition and support by the Kenyan government.

Before mapping resources were available, residents of Kibera often couldn’t locate medical services in the crowded slum. With mapping data, they can easily locate and obtain medical care, as well as other life-changing services. The open-source nature of OSM also allows Kibera’s residents to mark hazardous areas such as those that are unsafe for women to travel through alone, notifying their community, and culminating in the installation of a police or government presence there to ensure safety.

This story is not unique to Kibera, and similar changes are taking place all over the world. Remote African villages are identifying and marking areas where female genital mutilation occurs, allowing aid groups and community members to provide assistance, and help young girls escape violence and abuse. In general, mapping informs communities and governments, facilitating a more active role in shaping their future.

Mapping data is also invaluable in the case of disaster. When hurricanes, typhoons, floods, or other storms hit mapping data gives a more accurate representation of where people are, and how many are in danger. Decisions about aid and evacuation are more informed, while search and rescue operations are expedited. The same holds true in monitoring the spread of disease outbreak, and more effective safety measures like quarantines are enabled using GIS data.

5. Getting involved is easy

Assisting in the development of these maps is as simple as making an account on OSM, or any of their affiliate organizations like the Humanitarian OpenStreetMap Team (HOT), and browsing their current projects. Once your account is made, simply navigate to the "contribute" or "projects" panel and you’ll be greeted by an image similar to this one (with layout dependent on which OSM affiliate you’re using). 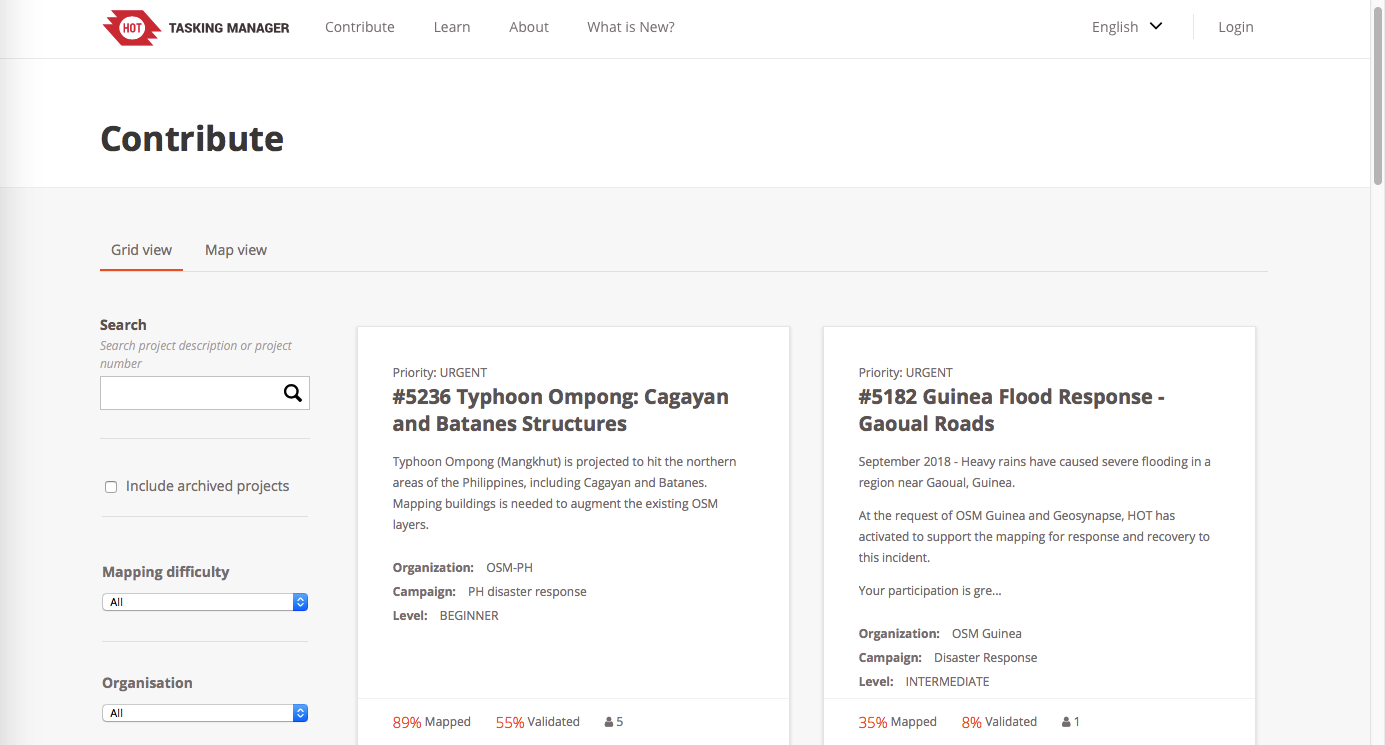 You can see in the image above that each open project on HOT has a priority level ranging from low to urgent, and also a note on the percentage of the map completed. Different community and aid groups will begin these projects for areas in need of GIS data, opening them to OSM for mappers like you to contribute to. HOT also hosts a tutorial video explaining to new users how to use the in-browser mapping software and further describing the mapping process as a whole.

Partner organizations like Youthmappers are another way to get involved, and often host “mapathon” events where groups of people gather in person to educate new users on how to use OSM’s online mapping software, and work together to work on an open mapping task.

Tags:
GIS, mapping, Technology, OpenStreetMap, volunteer, data, pfcorrespondent, storyfest2019
How do you move the Planet Forward? Tweet us @planet_forward or contribute to the conversation with your own story.
Related Content Hub:

Chris Tonge and Chanel La with their dog Chuckles in their Chicago home. (Courtesy of Chanel La)

This is an early prototype of the camera. Research divers will be able to use GPS to create accurate maps that can be compared point-by-point over time. (Illustration courtesy of Richard Vevers/The Ocean Agency)

Abby Wallace
George Washington University
On the verge of vanishment

Many species of reef-building corals, which are vital to the health of ocean ecosystems, face risk of extinction. (Joe Hoyt/NOAA)

How are college students handling the transition to all e-learning? Six students at SUNY Plattsburgh provided an update.