Skip to main content
You are here: Home / How the different cayes in Belize practice sustainability

How the different cayes in Belize practice sustainability

Caye Caulker in Belize has only one settlement, to the south, known as Caye Caulker Village. The north part of the island has a forest reserve that features a dense mangrove forest and diverse birdlife. (Dronepicr/Creative Commons) 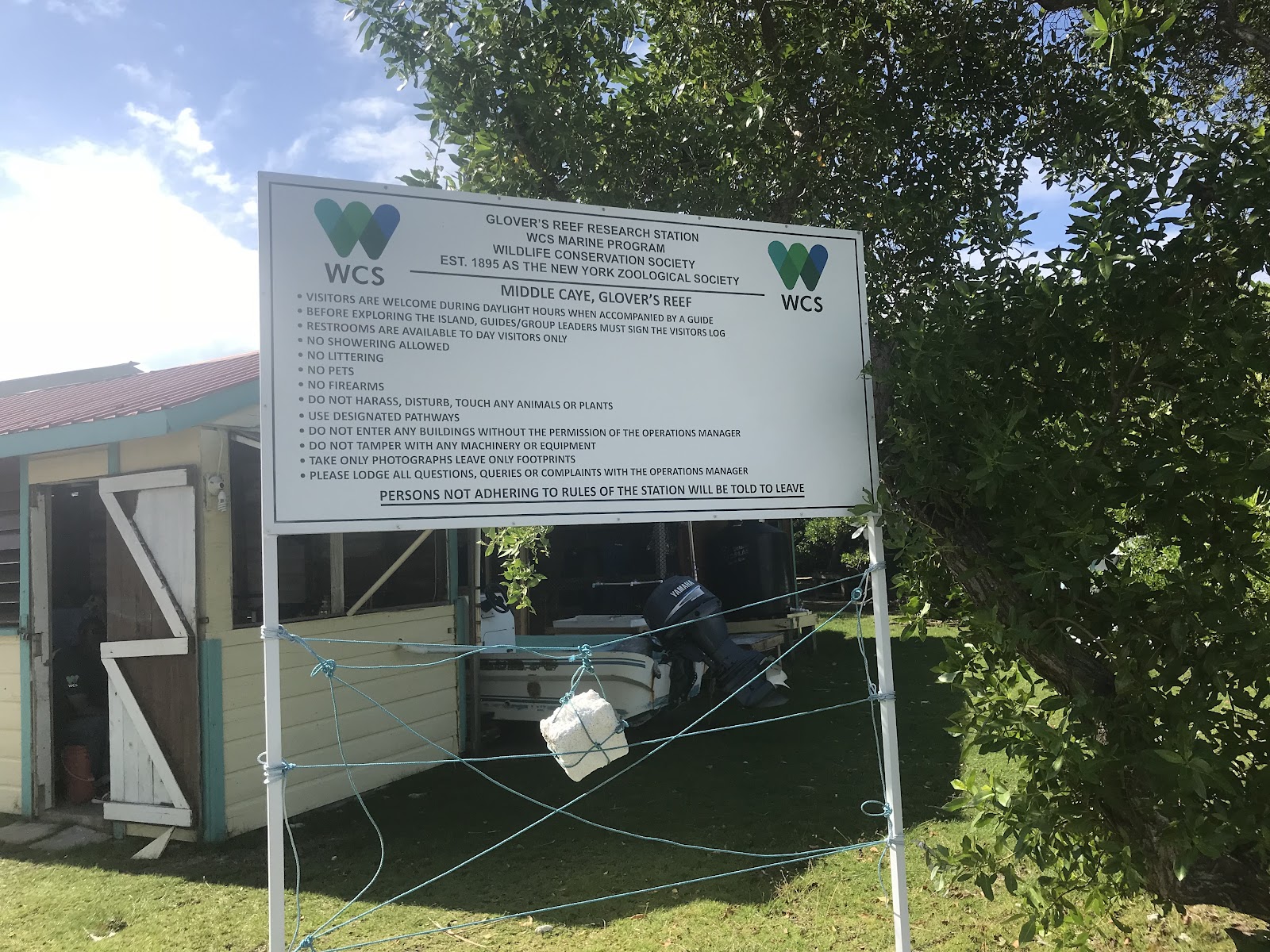 This is Middle Caye. It is home to the Glover's Reef Research Station. WCS Marine Conservation Society tackles a variety of different issues, for example overfishing and measurement of the effects and threats to sea turtles. 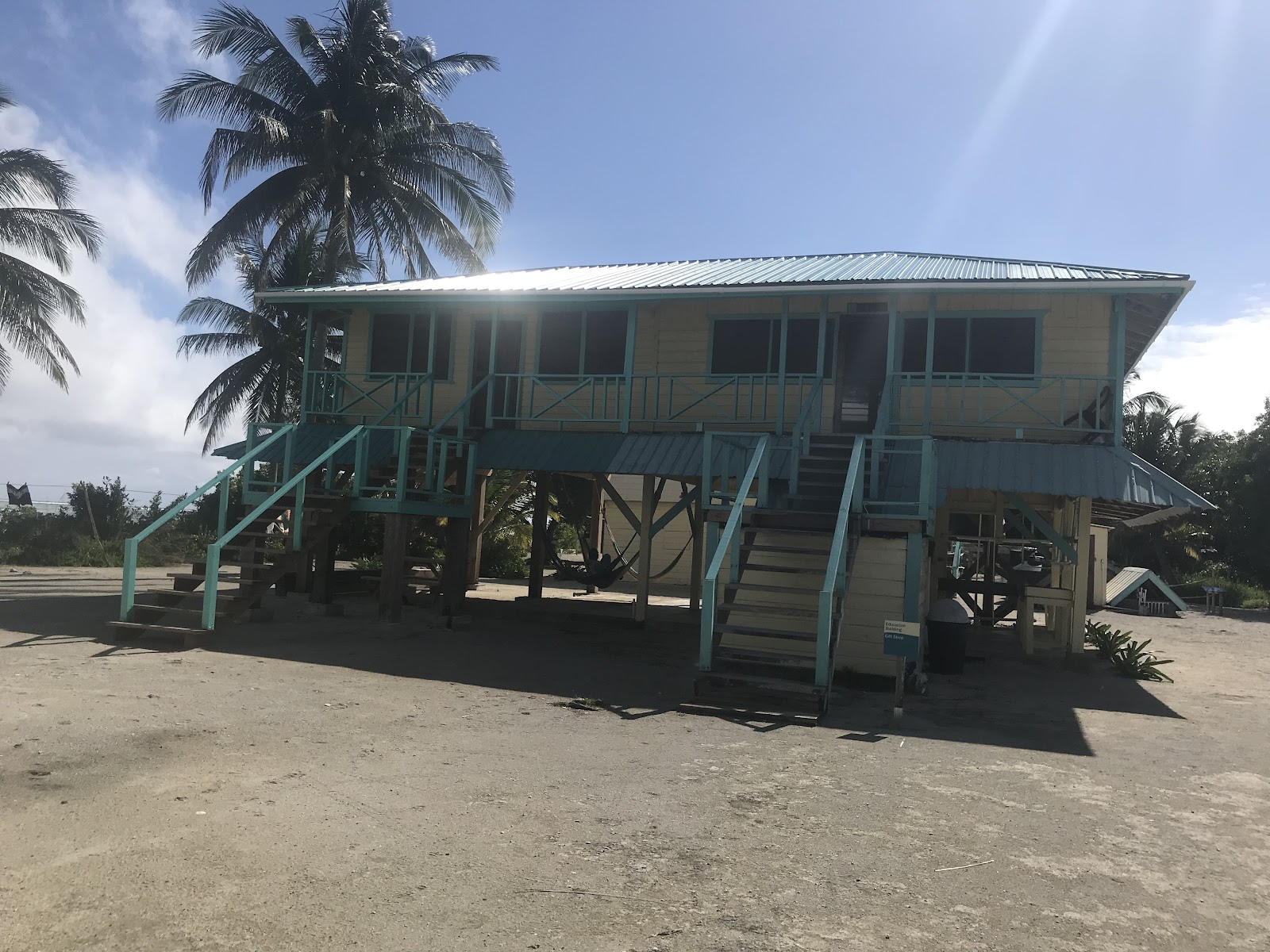 This is the homing station to the researchers who travel from all different parts of the world to contribute the saving of cayes. 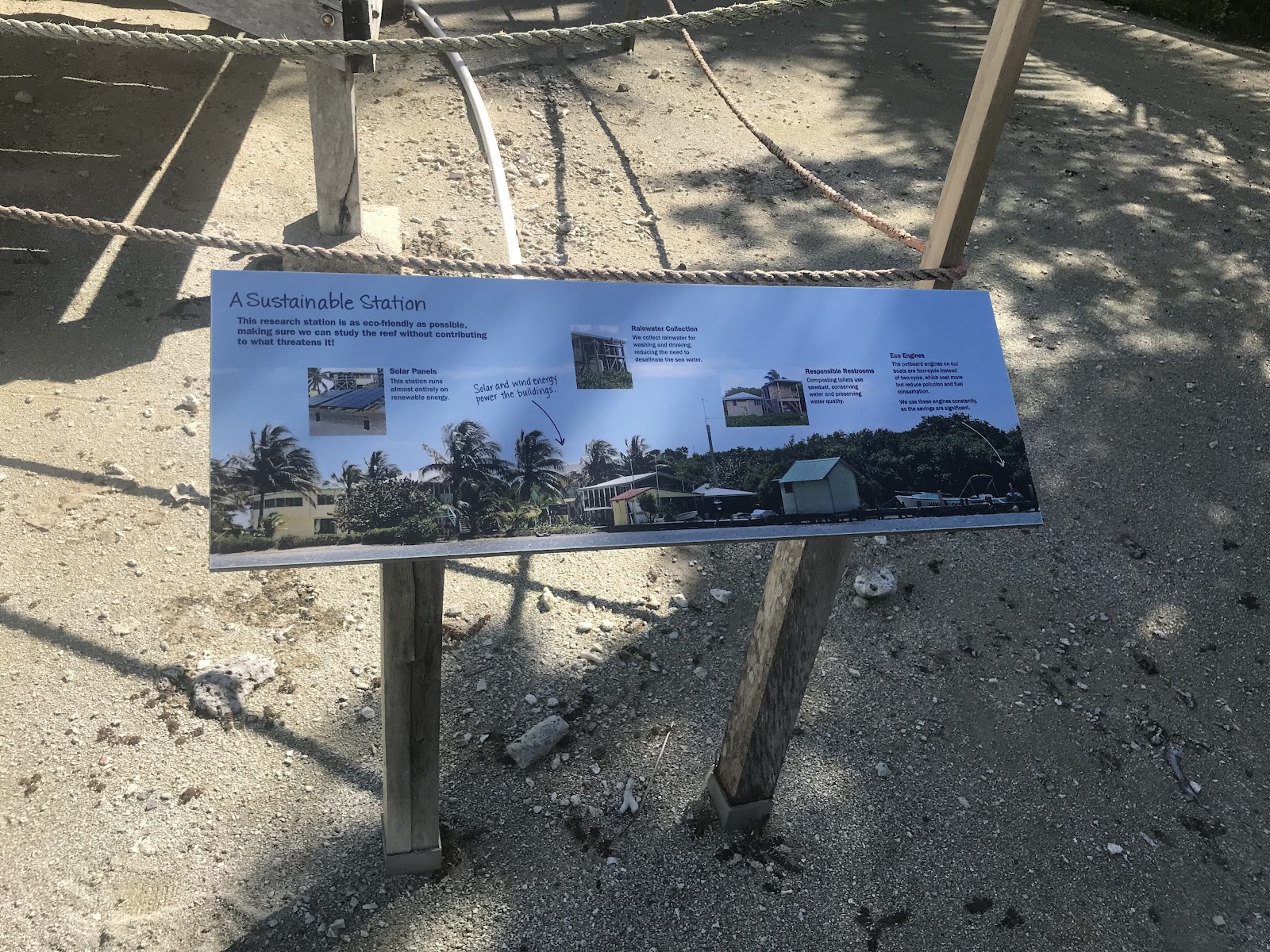 Since the cayes are isolated from the main island, it is important for researchers to practice sustainability. This shows what is added to island to make it more eco friendly, including solar panels and wind energy, composting toilets and rainfall collection. 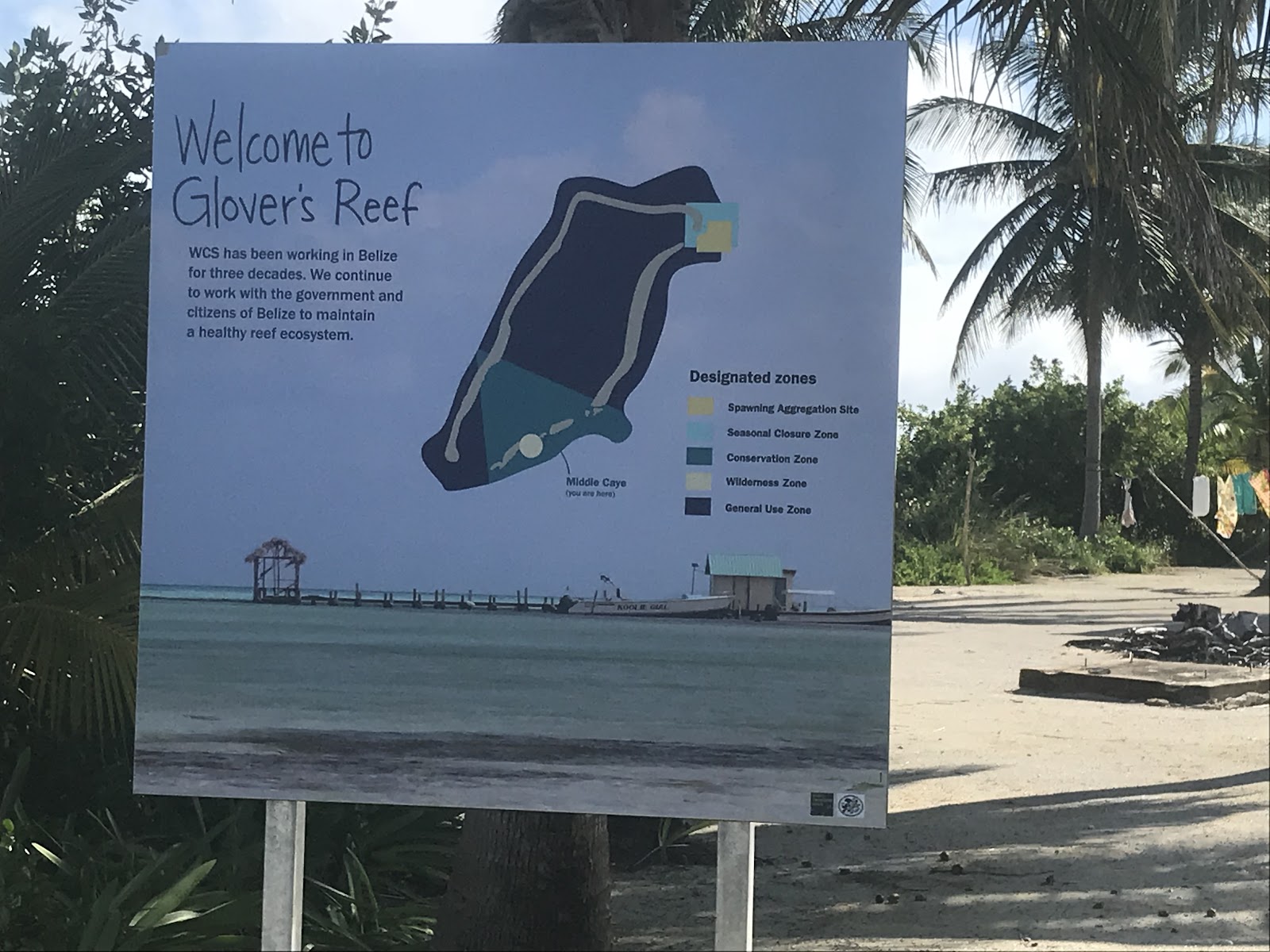 Each of the cayes are broken up into zones. General use is where most of the tourist use is. The other zones like wilderness zones, seasonal closure zone, conservation zone and spawning aggregation site are protected by the government with certain limits and use of the property. This is often decided by a a council of locals who push to see how they want to keep conservation. 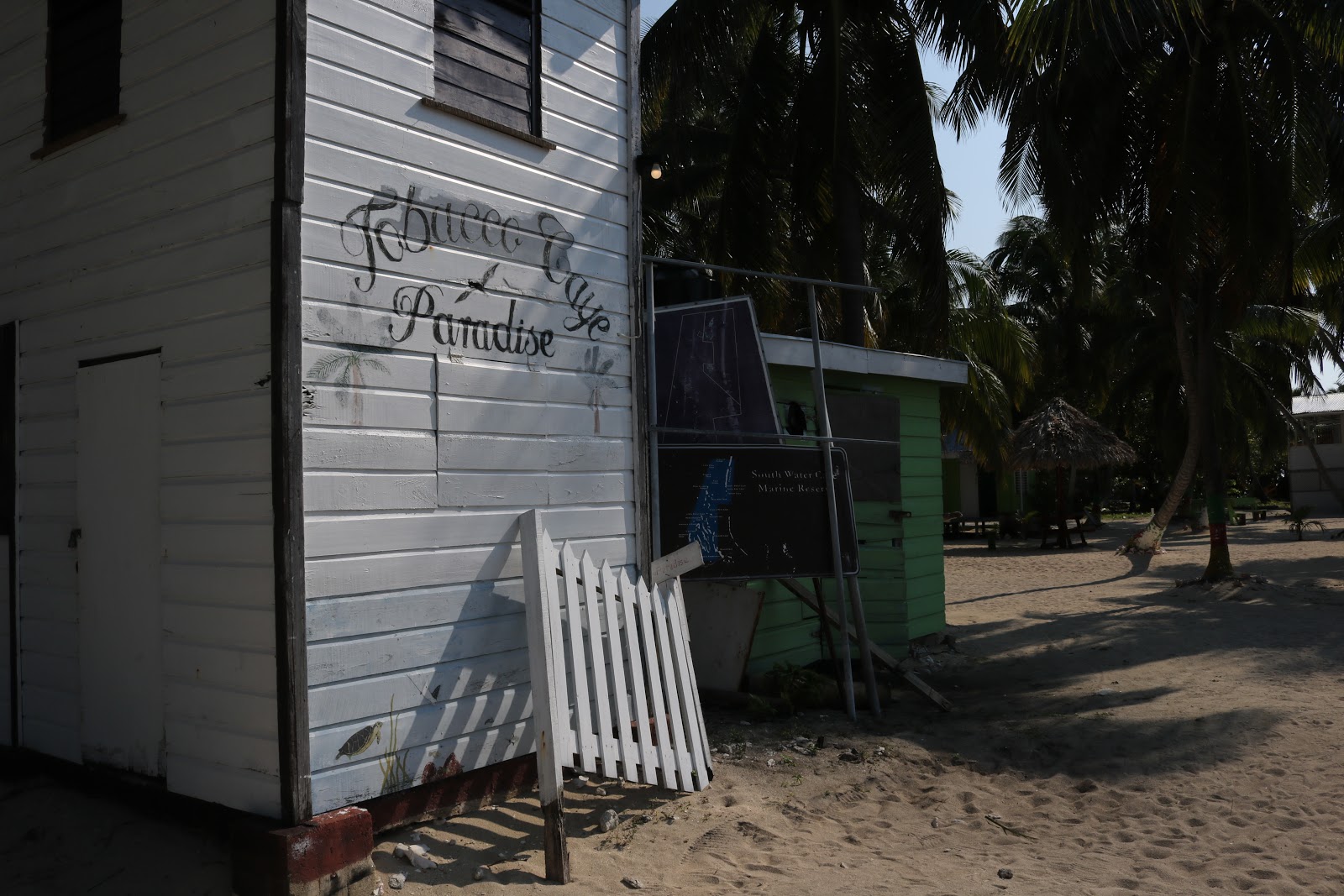 Tobacco Caye became a tourist hotspot; one family opened their home as a business. This island is shared between local families and people who visit and stay on the resort. 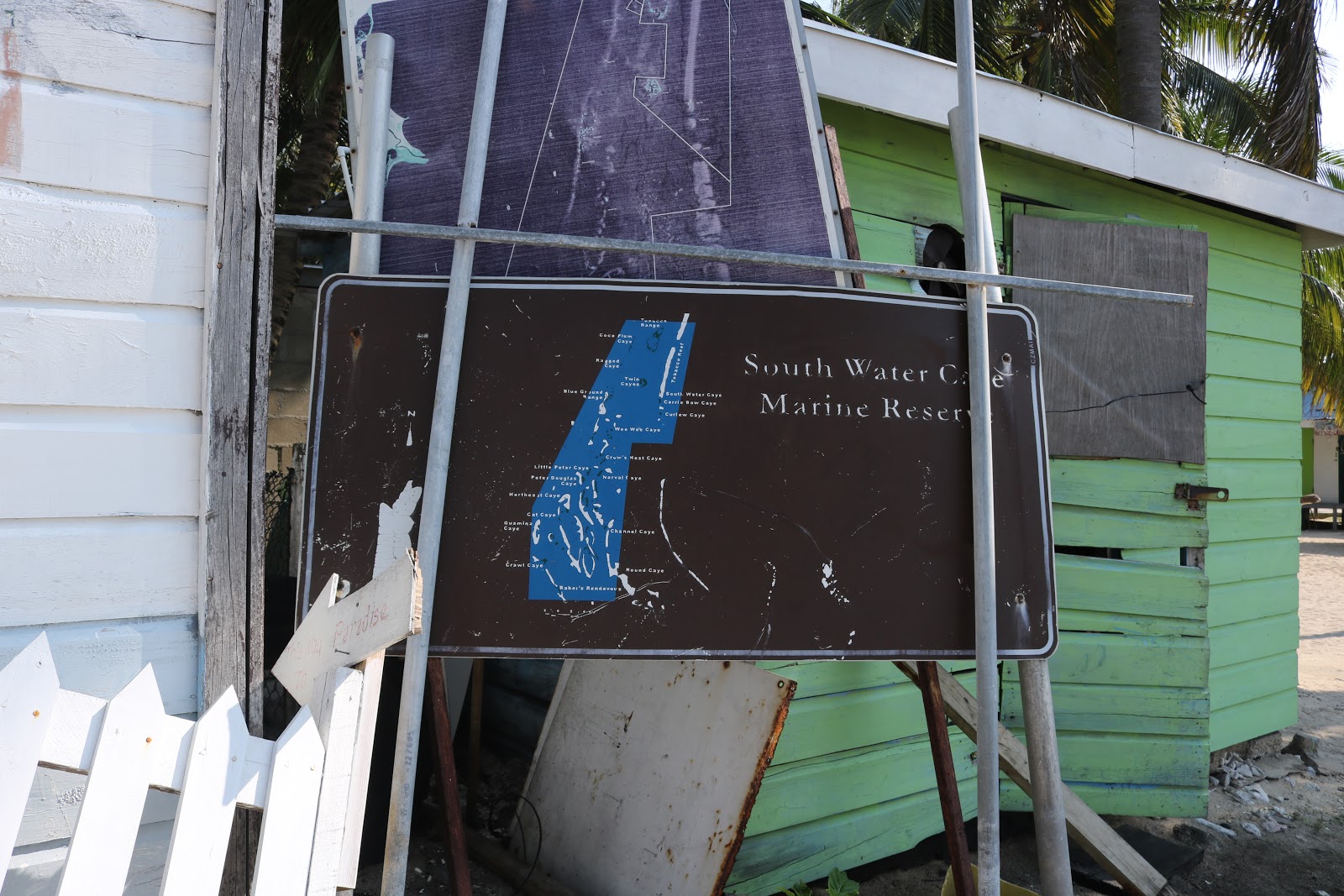 South Water Caye Marine Reserve was the largest marine reserve in the Stann Creek District. However, the district is now split into two different constituencies. There are Dangriga which contains the villages, towns and then offshore cayes. This so happens to fall under the tobacco reef were people turned their homes into a resort to make ends meet. 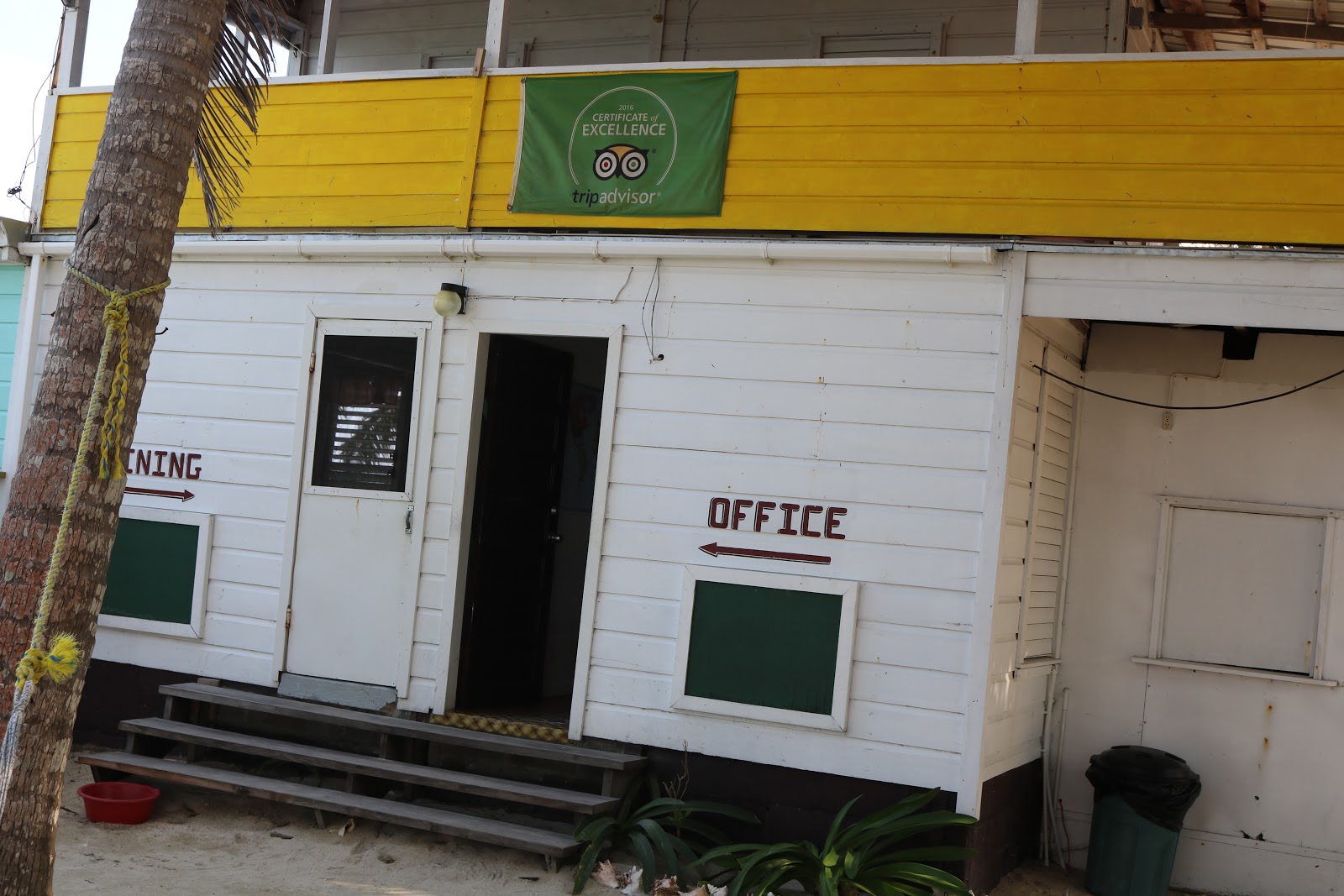 The main office on the resort. This trip advisor sign promotes a image of good business so that it can attract more people to visit. Tobacco Caye is also a stop for people on cruise ships. Harvest Caye was one that Norwegian Cruise Line is thinking of using as a beautiful diving spot. This not only takes away from families like these to boost the Belizean economy and jobs for local citizens. 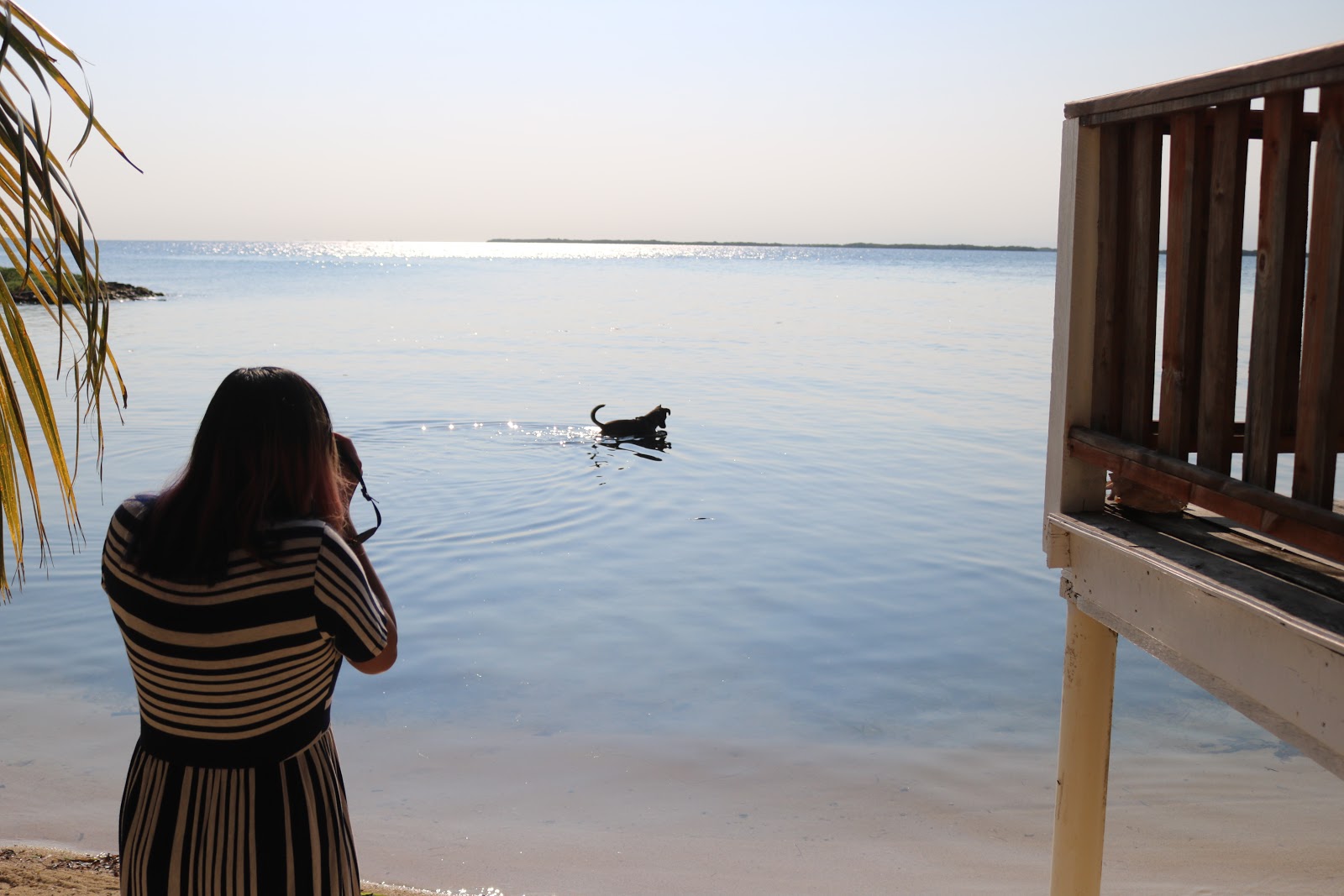 A tourist named Hannah captured one of the local dogs in the ocean surrounding Tobacco Caye. He happened to belong to one of the locals who shared the island with the people who visited. The dog once got stung by a stingray and he was obsessed finding another to relive the moment. 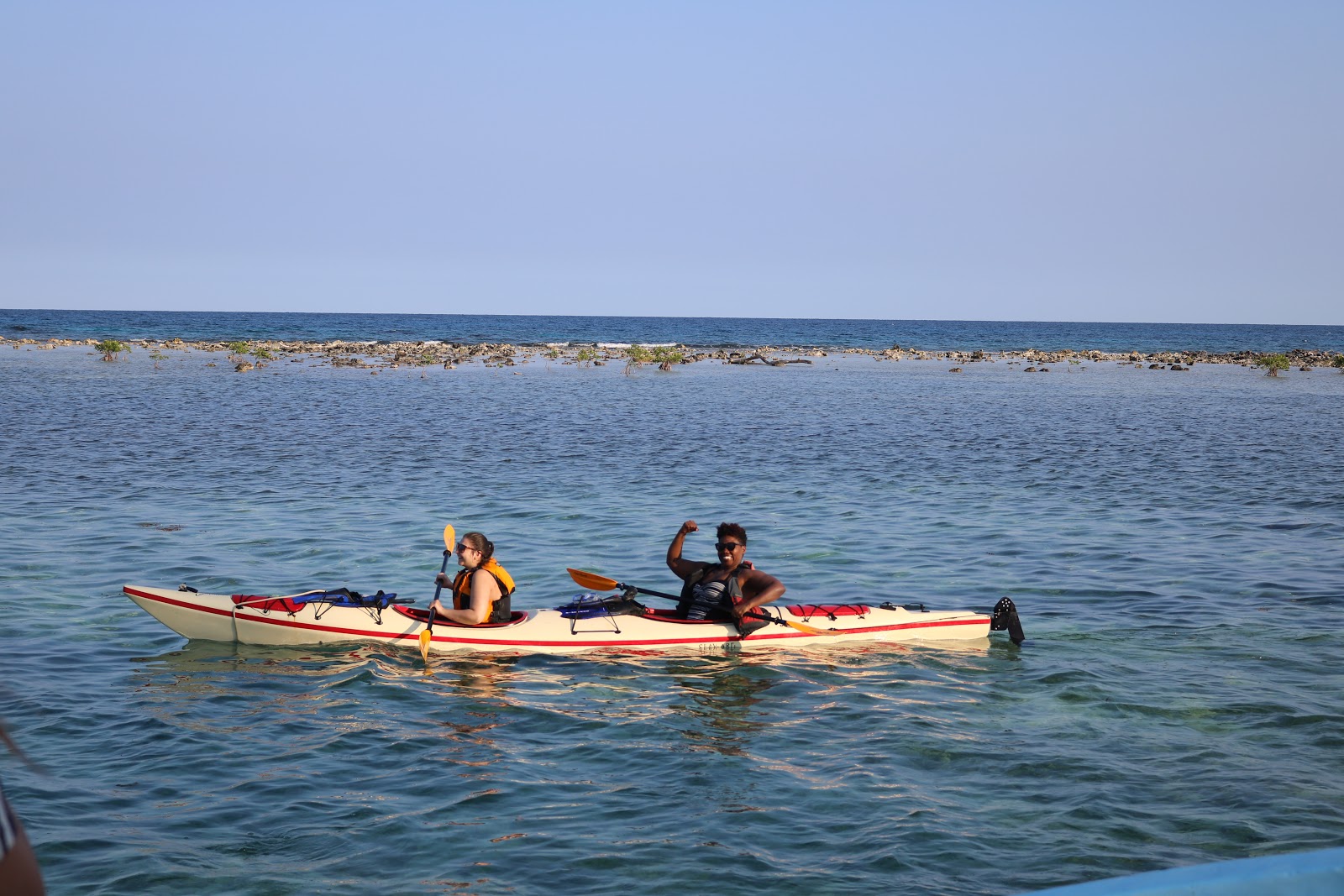 Some of the amenities included in the Tobacco Caye resort is kayaking. This is where tourists can kayak and snorkel to the Mesoamerican reef that happens to be one of the longest in the world. 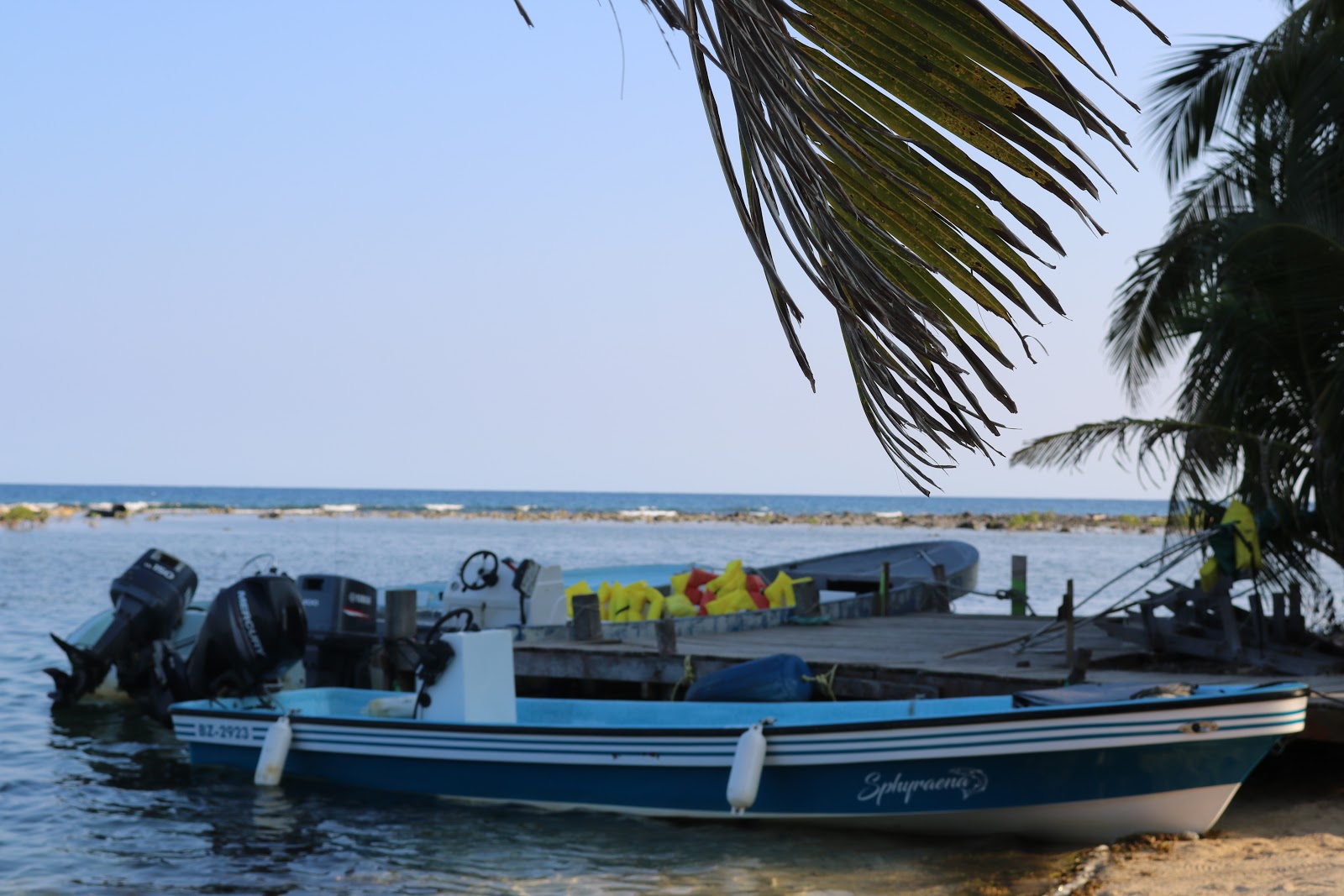 A boat tied at the dock in Tobacco Caye. This was in relation to part of the Mesoamerican reef in the background. This is one of the many reasons people come to visit the cayes in Belize. 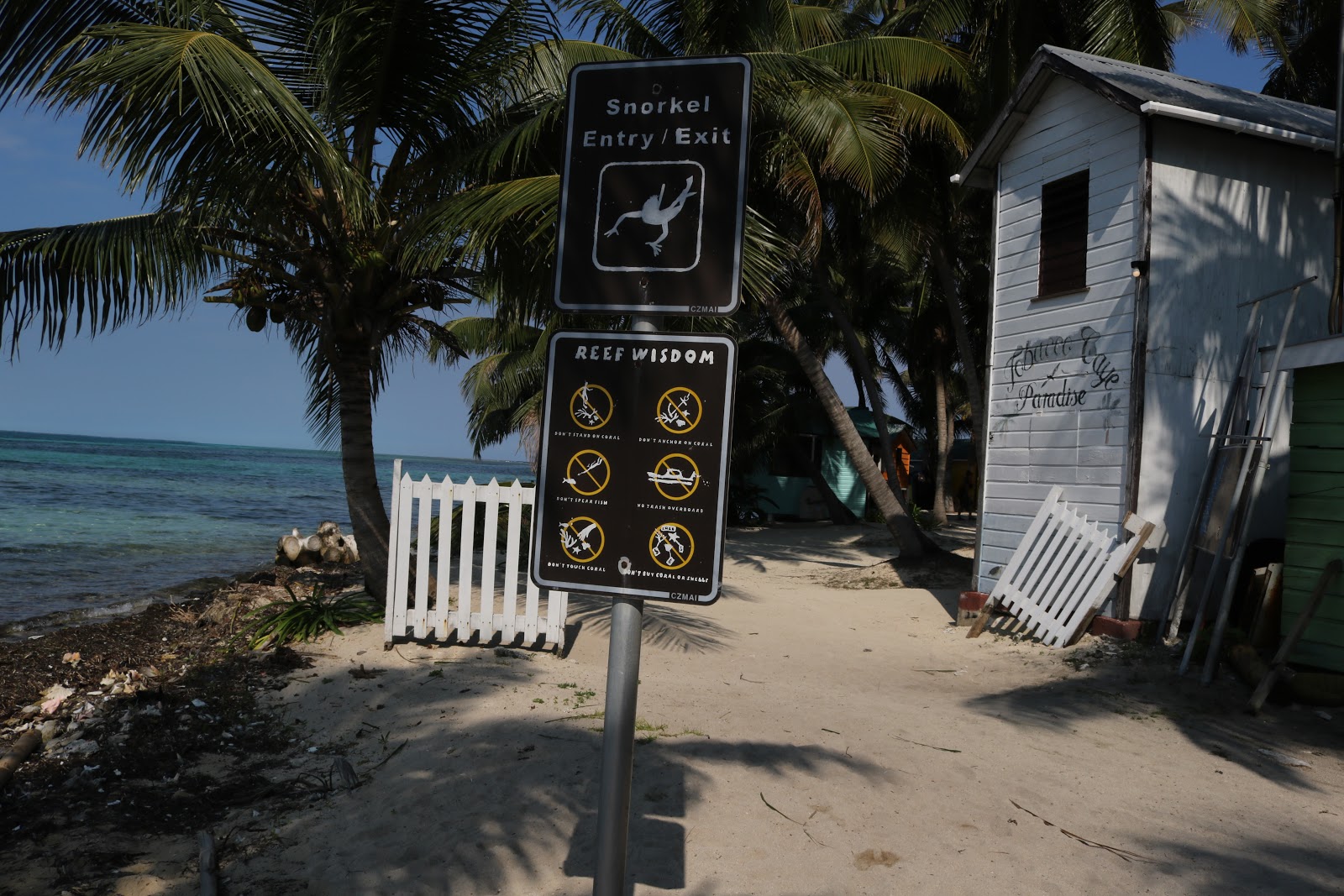 A sign outside Tobacco Caye resort that explained the rules of conversation to the tourists. They do not have to compromise loss of business and ocean life conservation. This caye provided education on every front. 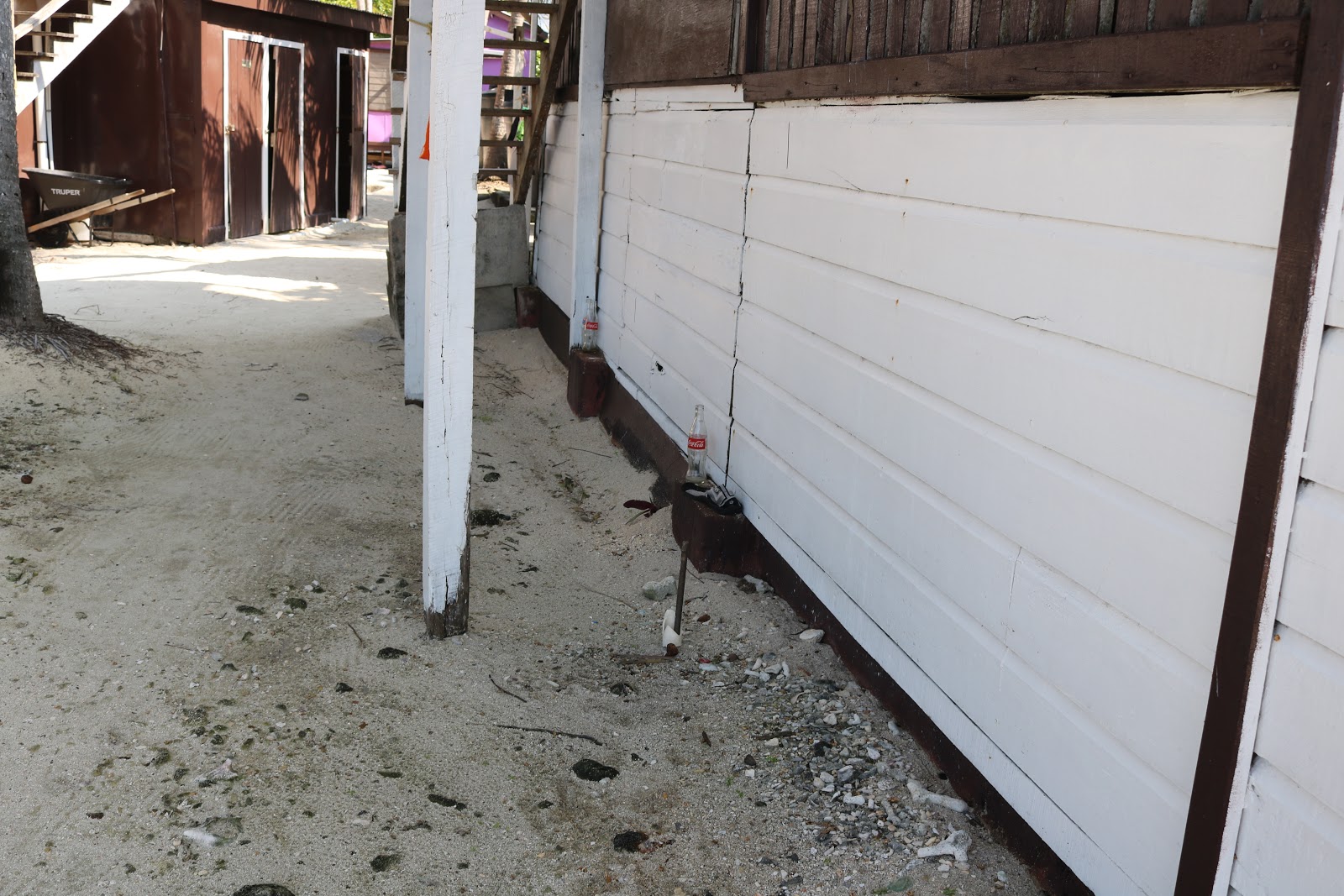 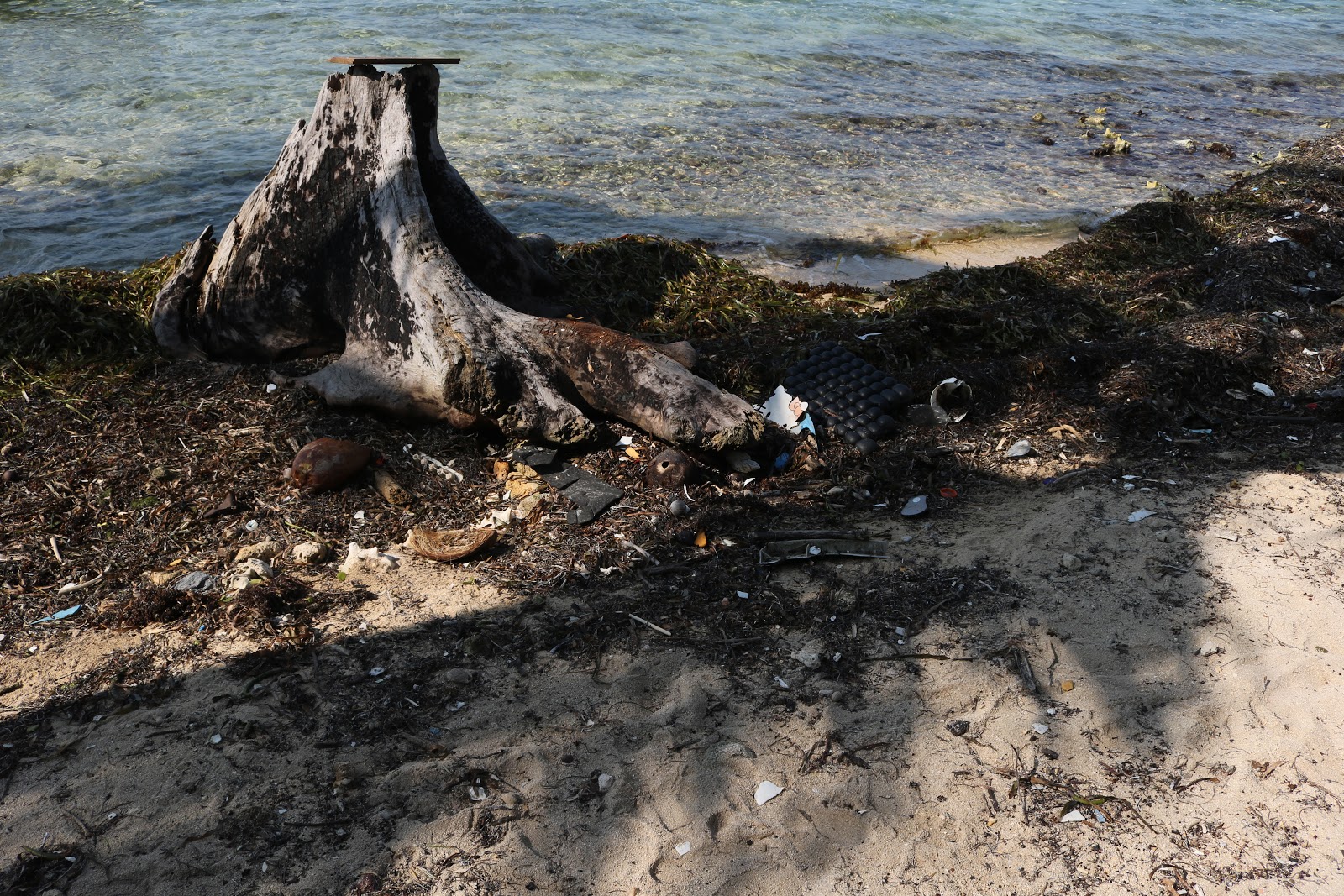 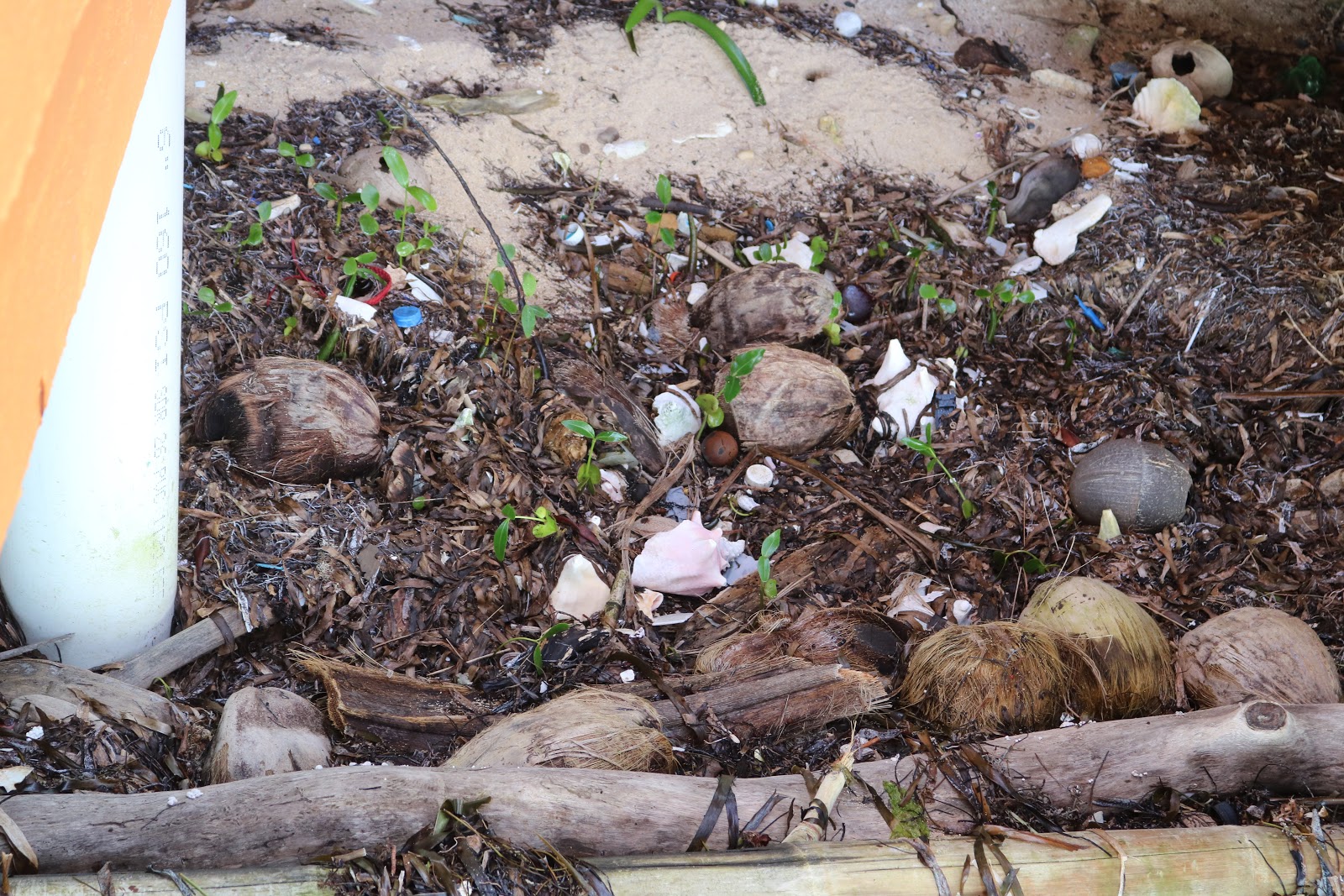 One of the biggest threats on general use zoned cayes is pollution. However, no one can trace it back to one source. It can also come from the towns, villages countries near by. But more visitors more pollution if strict regulations are not in place. 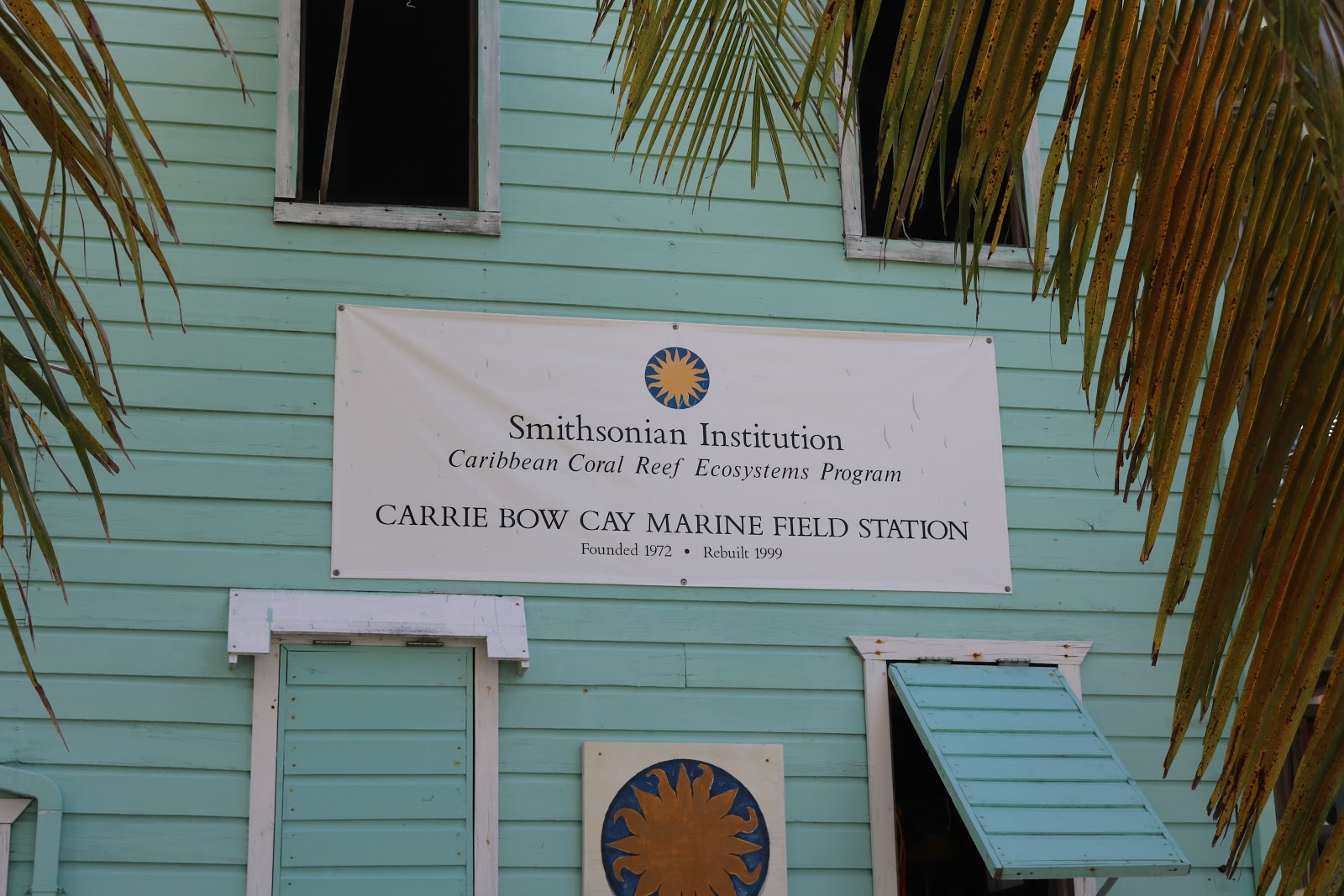 Lastly Carrie Bow Caye: A home to Smithsonian Institution. It is a program that studies coral reef ecosystems that also include different plant species. This is home the labs where researchers bring back bleached coral to test. 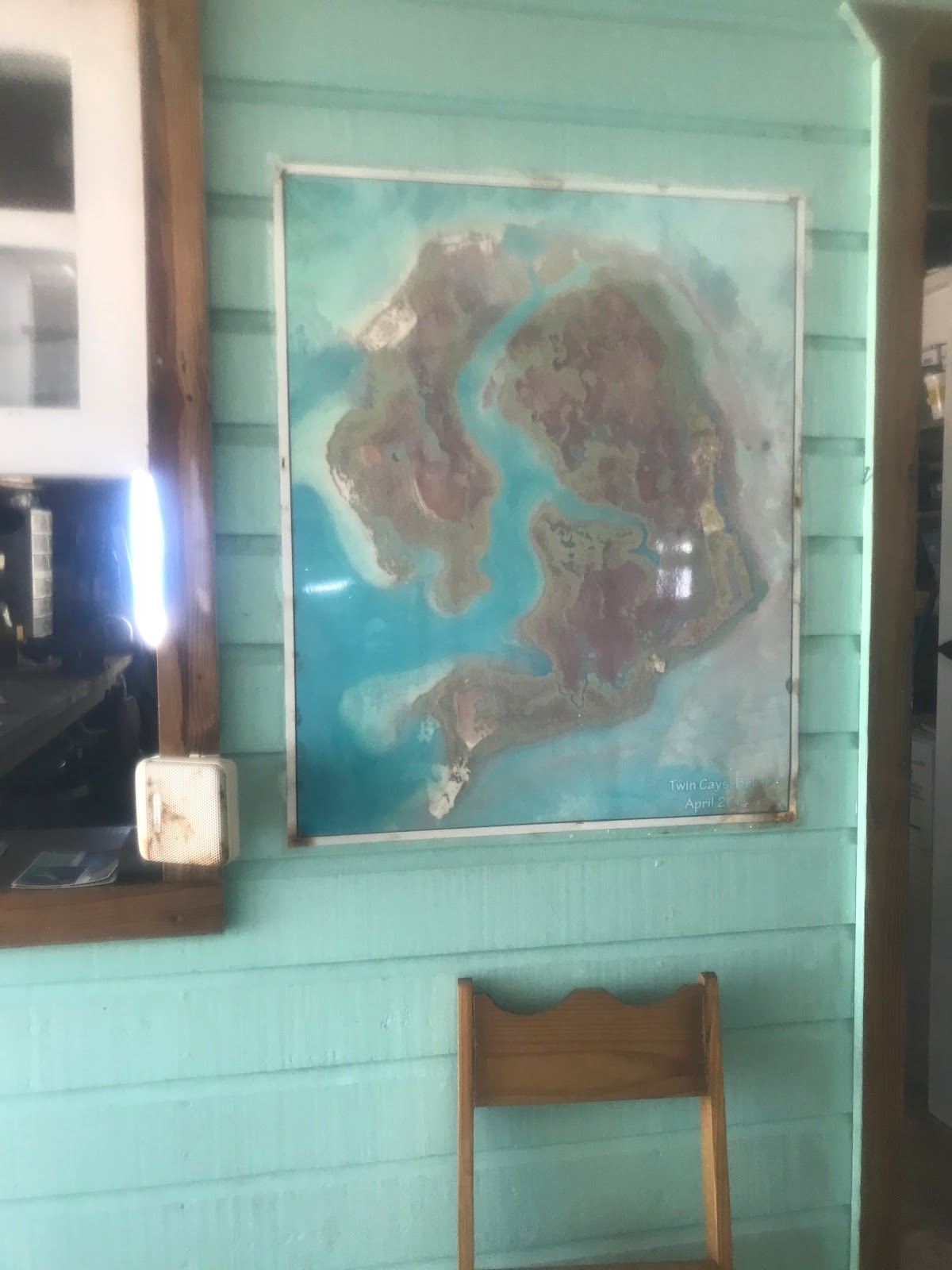 The aerial map of the Carrie Bow Cay. 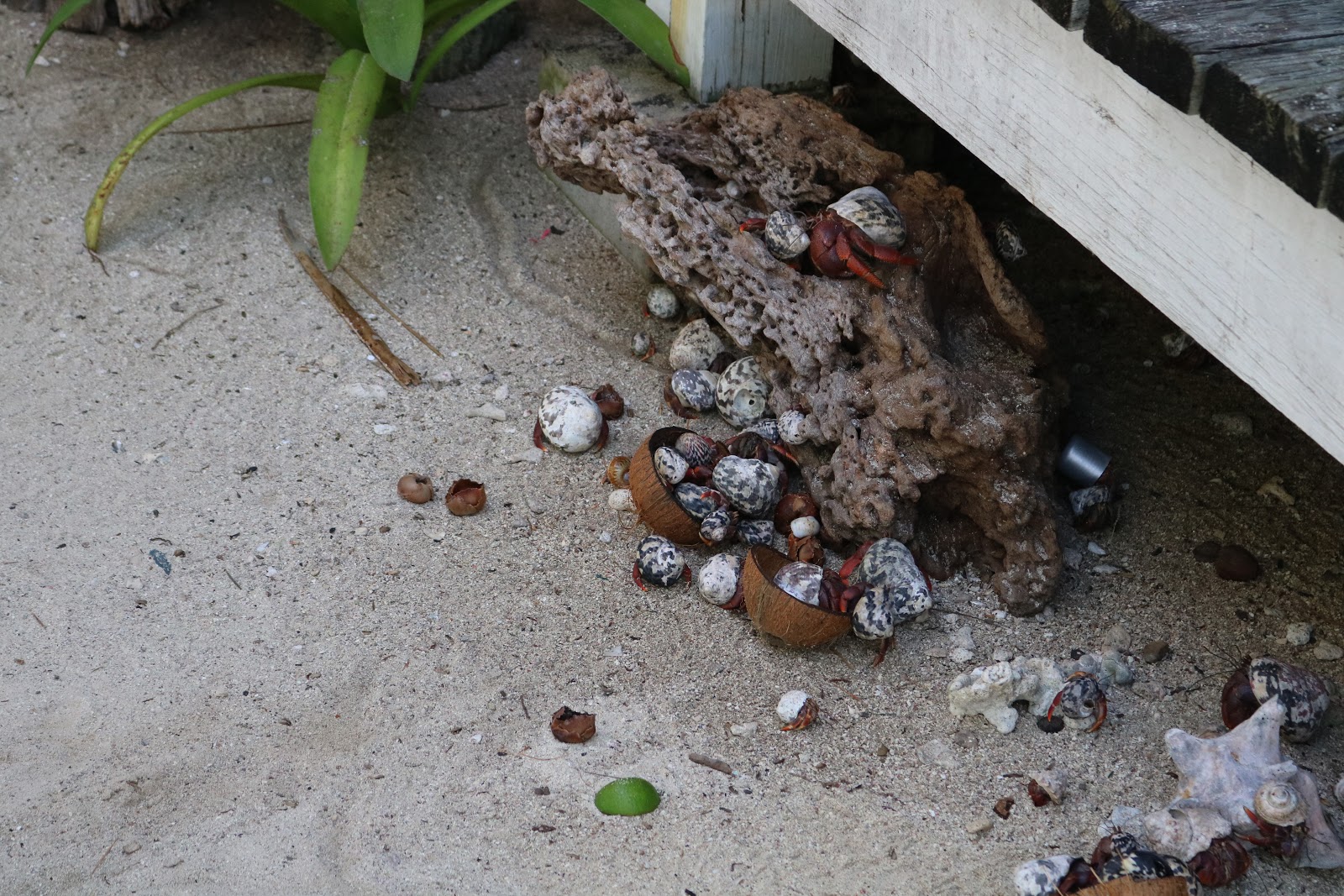 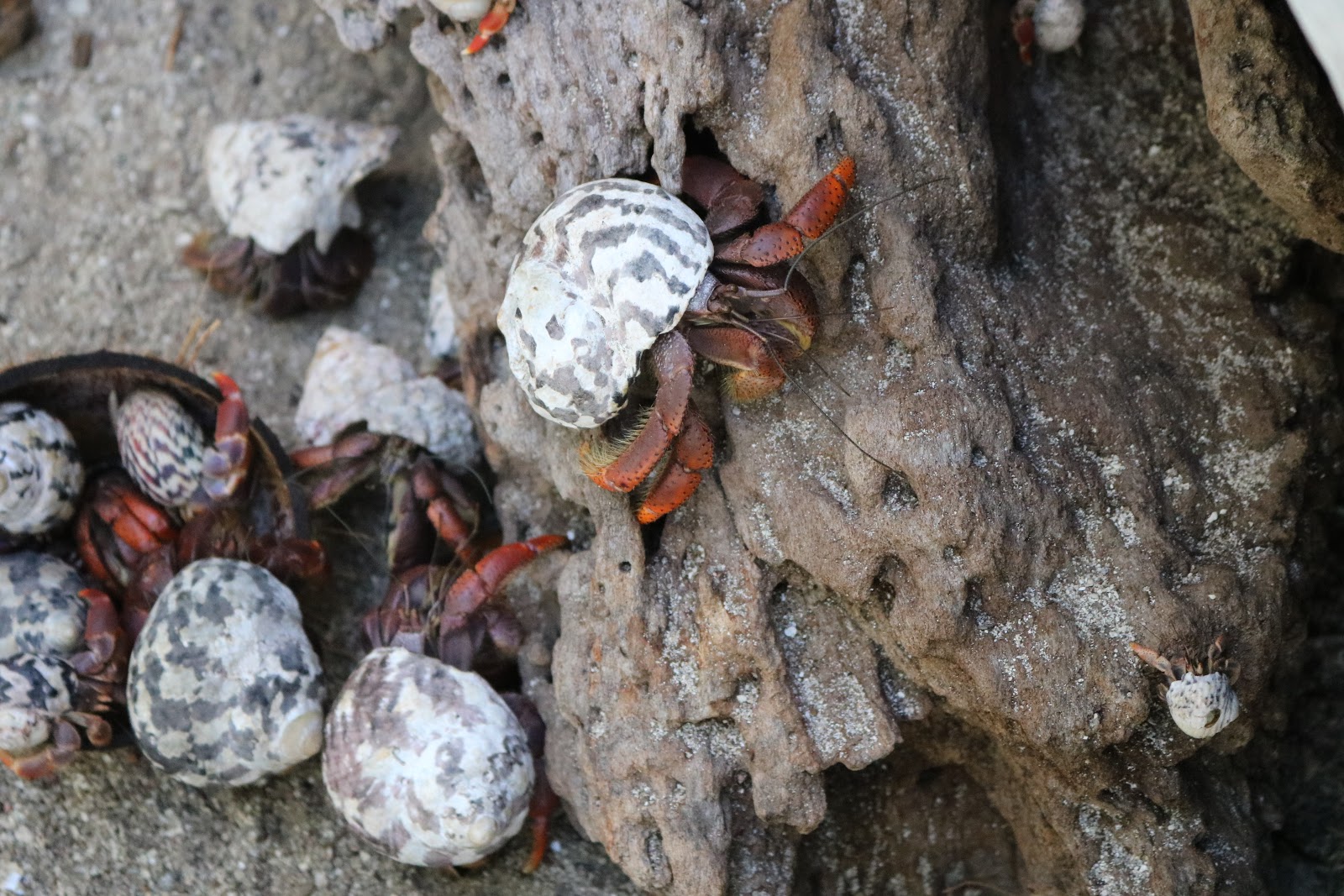 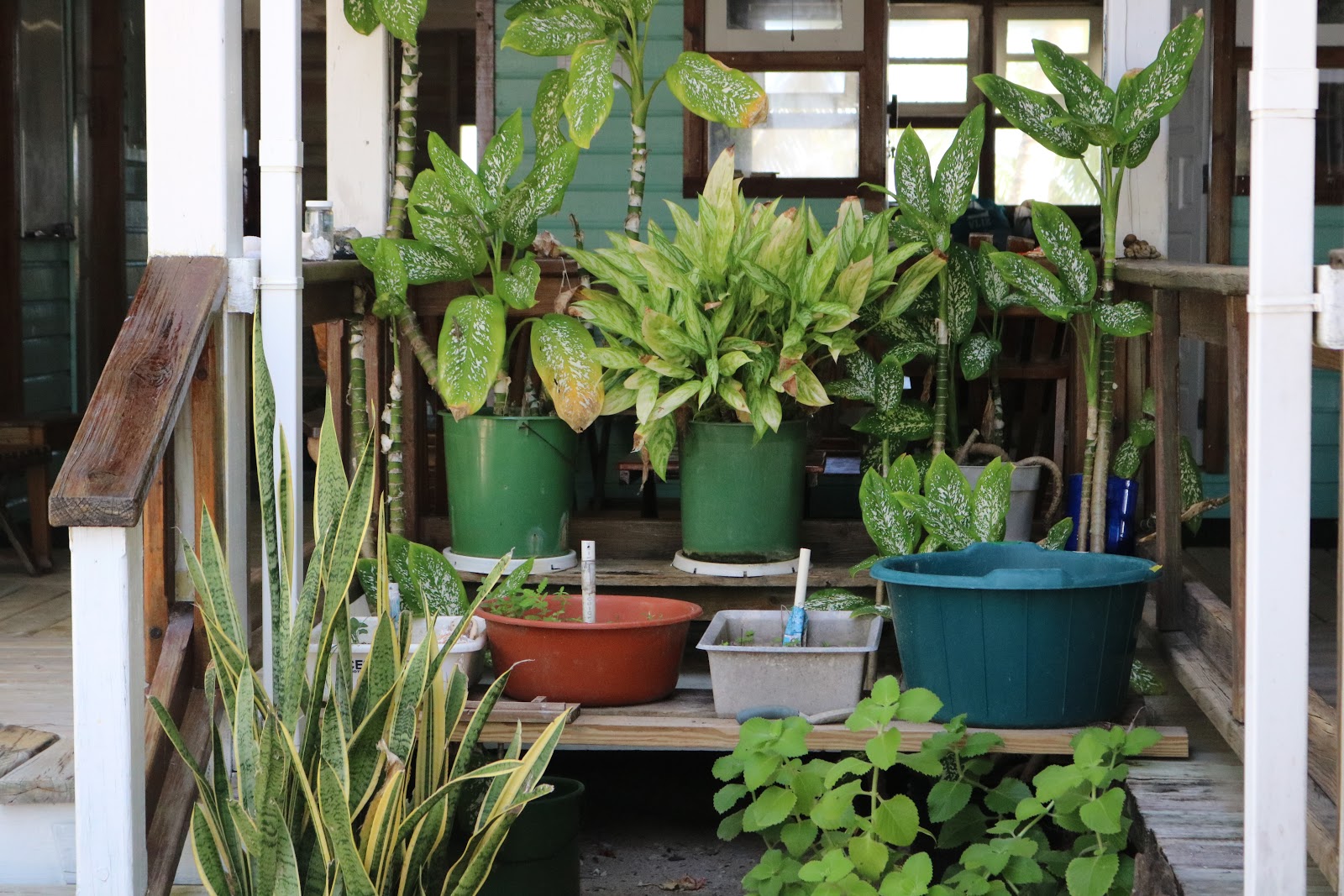 Hermit crabs living on rocks near the entrance of the exhibit. It is ironic that so many crabs lived near the plants the Smithsonian researchers were studying. It started to show the important relationships between the plants and sea creatures that live off of them.This similar in a ironic sense  to what he explained with the importance of coral underwater with all of the beaching due to humans activity in global climate change. The importance of the bacteria on plants and the food chain that lives off of the coral creating an imbalance due to climate change. 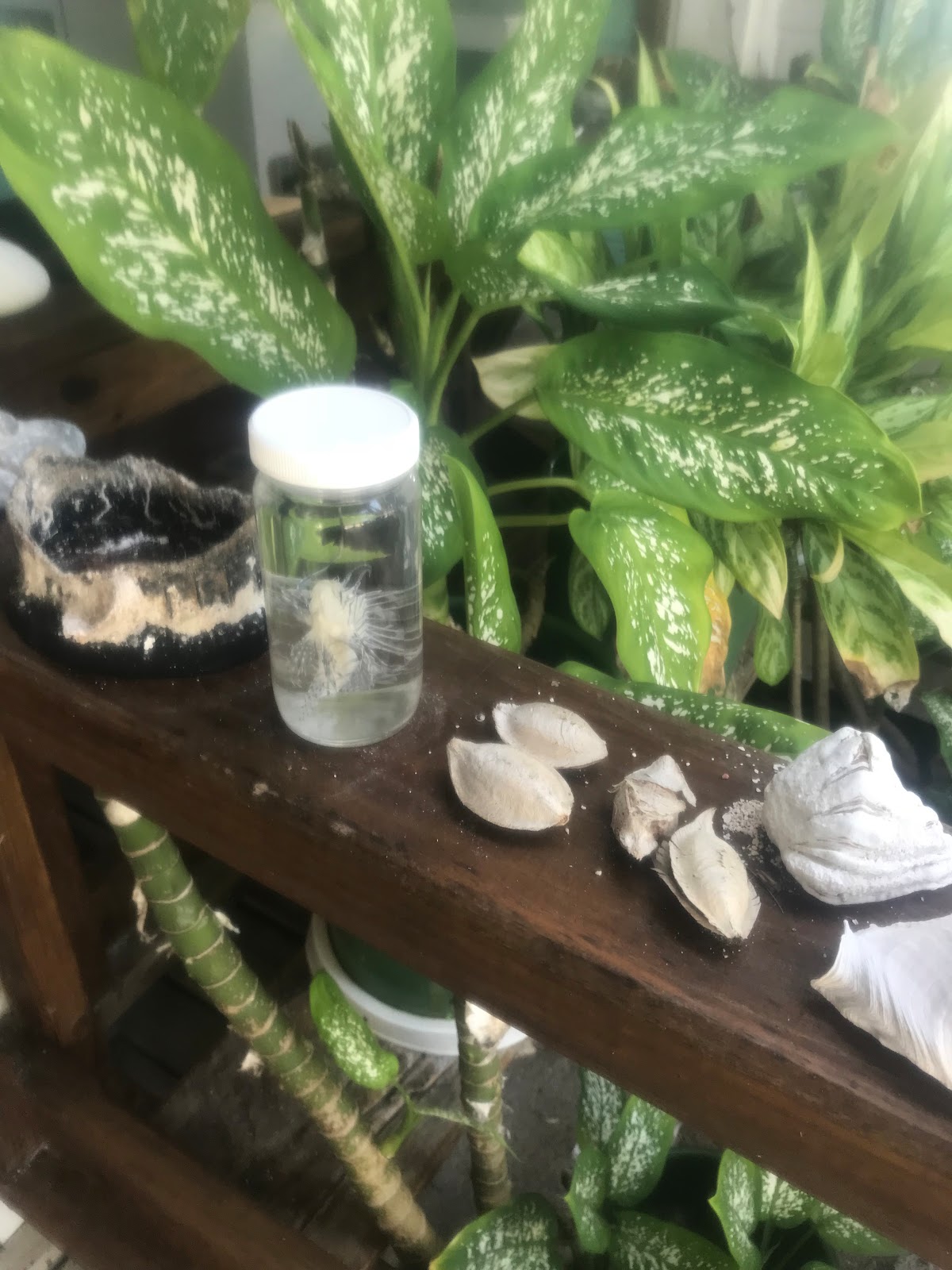 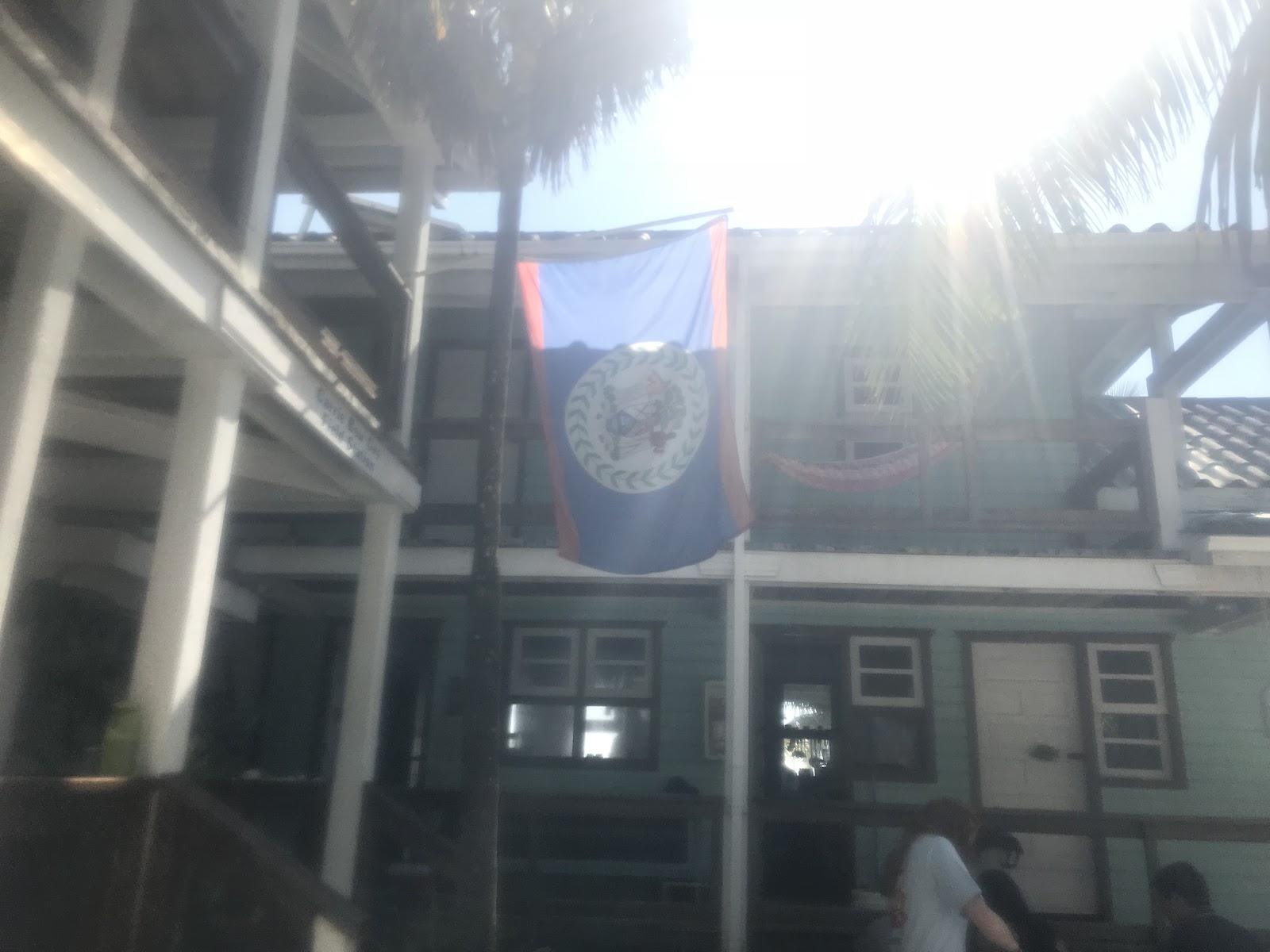 White and brown stripped lion fish captured to study, this is another major threat to plants and other fish which also effect the citizens who live off of the fish they catch. A Belize flag opposed to an American flag, a patriotic representation. They work closely to the Belizean government to insure the research reciprocated or implemented through the government. 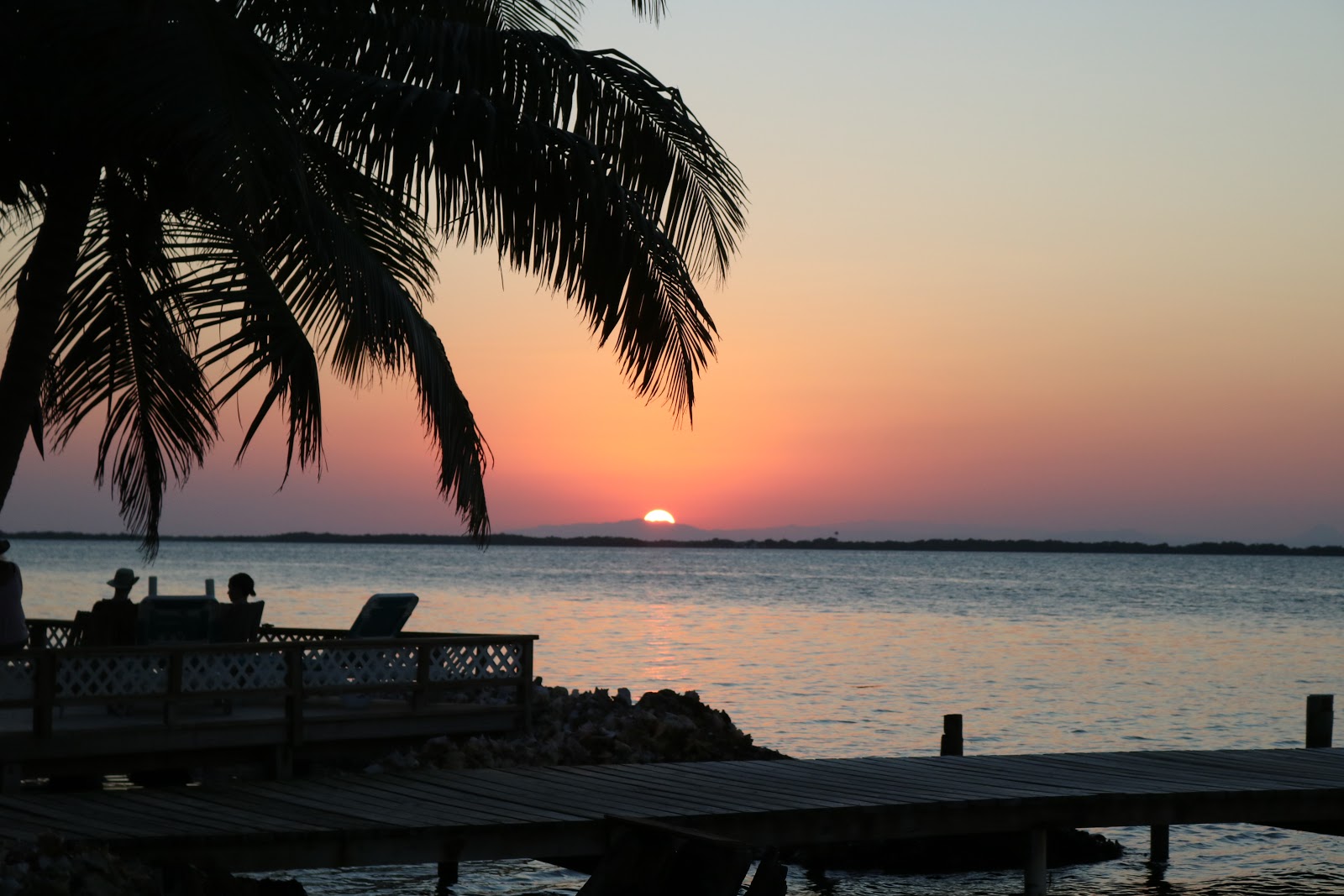 After visiting all three cayes, this represents the last night stayed at Tobacco Caye — and coming back to the States, wishing I could bring back whatever I could to show people this important and universal issue.

Tags:
global journalists, Sustainablity, How-to Guides, Recycling and Uncycling, green living, education Belize, storyfest2018
How do you move the Planet Forward? Tweet us @planet_forward or contribute to the conversation with your own story.
Do you think this helps move the planet forward?
Overall Rating of
74

Lizzie Stricklin
The George Washington University
Button Up!: Fran Putnam and the power of community organizing