Skip to main content
You are here: Home / Explainer: What is the 'carbon budget'?

Explainer: What is the 'carbon budget'?

The Paris Climate Agreement set an ambitious goal for the global community in 2016. The 170 of 196 countries that ratified the agreement have recognized that climate change is an existential threat to humans and agree global cooperation is required to combat this threat. As such, the Agreement laid out its aspiring goal of keeping global temperature below 2° Celsius of warming. The Paris agreement goes even further, motivating the global community to strive for keeping temperatures below 1.5°C.

What will it take to reach this goal? The Intergovernmental Panel on Climate Change, a coalition of climate scientists from around the globe, have laid out the maximum amount of CO2 that can be emitted into the atmosphere while still maintaining the 2°C increase in temperature. This threshold is called the carbon budget.

What is the carbon budget?

The Mercator Institute of Research on Global Commons and Climate Change has estimated that we have about 760 gigatons left in our carbon budget as of 2017. They also estimate at present, the world is still emitting 40 gigatons a year. If nations around the world do not commit to the objectives in the Paris Climate Agreement, we are looking at an exhaustion of our carbon budget in just 19 years.

The IPCC has estimated that we’ve currently spent over half of our carbon budget which stands at 2,240 gigatons of carbon, putting us on track to see over 2°C of warming within the next three decades if we stay on our current course. 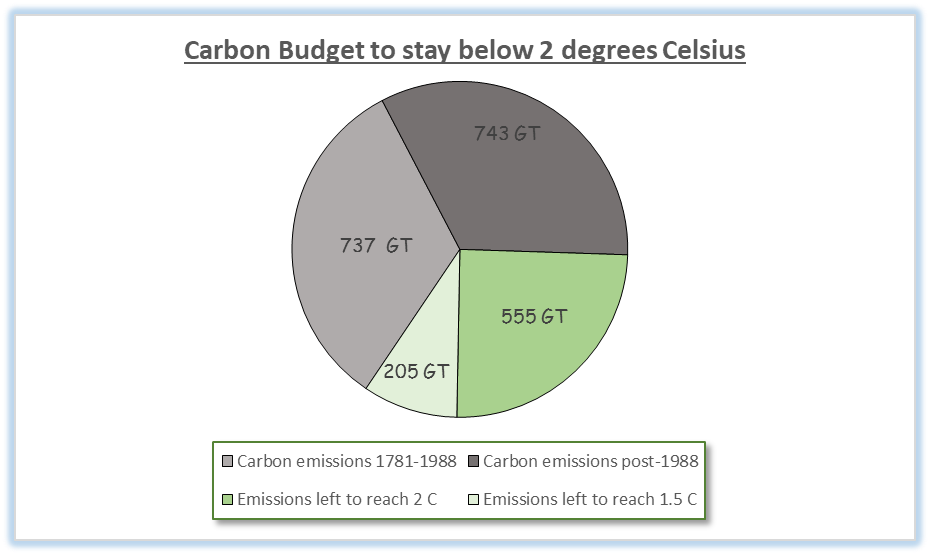 Using the IPCC model for the carbon budget, Carbon Brief has concluded that as of 2017, we only have 4 years left until we inevitably surpass 1.5°C of global warming. However, their analysis also showed that as of 2016, emission rates have been slowing down, suggesting signs of peaking.

Why all the fuss about 2°C?

There is a common consensus within the scientific community that we must limit the remainder of our carbon budget to stay within 2°C in warming. When climate scientists were first figuring out the effects of CO2 on the atmosphere back in the 1970’s – “early calculations suggested that if we doubled the amount of carbon dioxide in the atmosphere over pre-industrial levels, the Earth would warm somewhere between 1.5°C and 4.5°C,” according to Vox.

The next question was: How much of this warming can humans tolerate with minimal danger to human life? Temperature graphing has shown throughout human history, humans have lived within a temperature range that fluctuates between -1/1° Celsius. It becomes increasingly worrisome to think of a world where temperatures are more than double the upper limit that humans have ever experienced.

The scientific community has a wide range of assessments calculating the risks global warming could pose to human life.

We’ve already seen the increased risks that our current carbon output has produced:

Wildfires tend to be associated with hotter, drier weather, meaning that an increased climate is prone to producing more wildfires.

The oceans, at the current level they are rising, will put millions of lives at risk. As ocean surges continue to wreak havoc on our coastal cities, mass migrations are sure to ensue, causing political and economic turmoil for the more than 1 billion people living in low-lying areas.

Increasing ocean temperatures have been linked to higher frequencies of more intense hurricanes. Severe rainfall occurrences will increase along the eastern coast of the U.S  as a warmer atmosphere can hold more moisture: “We think that Harvey type of rainfalls will become noticeably more frequent as the century goes on,” said Kerry Emanuel, an atmospheric scientist at MIT.

Extreme droughts in areas like California and the midWest, are expected to increase as temperatures rise, resulting in severe agricultural damage and water shortages around the world.

These extreme weather related events already are becoming more frequent, and the earth hasn’t even reached the 1.5° C mark yet. If we can’t keep temperatures from surpassing 2°C, the risks to human life are only going to get worse.

We’ve got to make the budget but how?

“It is still not too late to limit the warming. Staying below 2°C requires social, financial, and technical actions by 2020 on a global scale,” said Veerabhadran Ramanathan, Chair of the Committee and Distinguished Professor at the Scripps Institution of Oceanography in San Diego.

Elsewhere in the United States, social action is being taken by governors, mayors, public officials, and educational and business leaders who have signed on to the We Are Still In pact. This agreement represents one third of the U.S. population and their mission is to meet the goals set out in the Paris Climate Agreement, even if the federal government does not intend to.

And according to The New York Times, the United States already has delivered $1 billion of the $3 billion in financial aid it has agreed to pay under the Paris Climate Agreement, to assist poor nations in the fight against climate change.

Technological action also is on the rise as negative emissions technologies, such as biomass energy with carbon capture and storage (BECCS for short), are receiving increased attention in the climate science community.

Ultimately though, we need global cooperation to combat climate change, and the Paris Climate Agreement was a great first step. We have the means to reach the carbon budget, we just need the political will and global pressure to keep the earth on track to staying under 2°C.

Tags:
climate change, carbon budget, Paris Climate Agreement, CO2, Carbon emissions, emissions
How do you move the Planet Forward? Tweet us @planet_forward or contribute to the conversation with your own story.

Up close with the deep blue of glacial ice. (Lisa Palmer/Planet Forward)

Lisa Palmer
Sr. Editor & Education Lead, Planet Forward
How one trip to a birding hotspot helped me overcome my fear

A cloud looms over the water of Pacific Harbour, Fiji. (Timothy Ah Koy/Unsplash)