Skip to main content
You are here: Home / Is Upgrading an Old SUV More Cost Effective Than Buying a...

Is Upgrading an Old SUV More Cost Effective Than Buying a Prius?

The world of efficient automobiles can be an expensive place. Newer, more efficient cars can sometimes scare away average consumers who are looking to get a deal on a new pair of wheels. For example, A new 2011 Nissan Leaf costs around $33,000 (closer to $25,000 after the federal government pitches in with a $7,500 subsidy). That’s the kind of sticker price that can scare off anyone who doesn’t have a garage that looks like Jay Leno’s. Sewanee’s Eco-Auto club set out to find a solution to the problem by giving an old clunker a serious upgrade.

They started small, by giving it a basic tune up and lowering the suspension. Then, they made the car more aerodynamic by removing the luggage racks, adding a new fender, and adding panels on the side of the vehicle to improve air flow around the car. After a new set of tires, they added a device to the dashboard to track their progress. They found that they had taken the car’s MPGs from 17 to 25, at a cost of only $1,500. At that rate, they saved $824.47 per year in gas costs, and their project will pay for itself in just under 1 year and 10 months.

But is this the most cost effective way to get better mileage on your car? Let’s take a second to examine the math. We decided to compare the Eco Explorer to a used 2006 Toyota Prius and a 1997 Honda Civic. 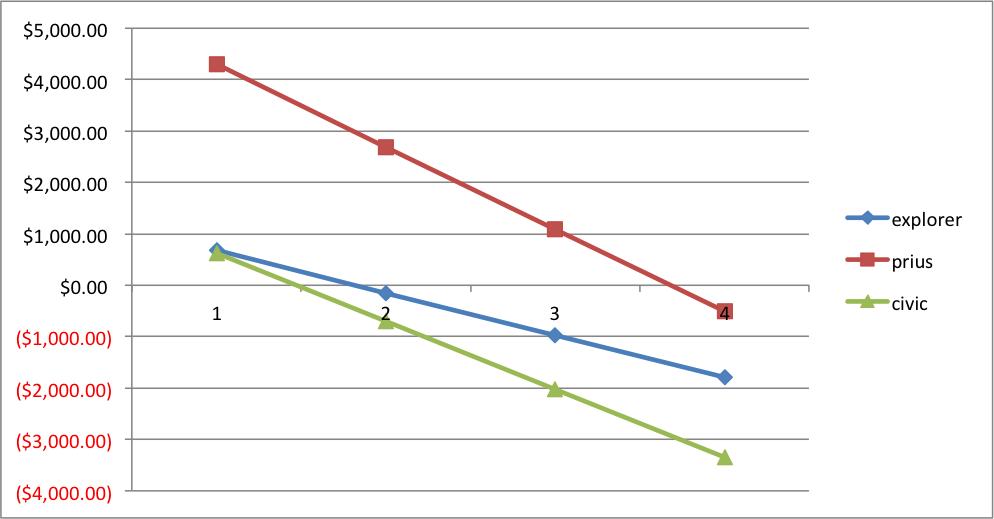 As you can see, buying a used Civic is a slightly better investment than Eco-Auto’s upgrade if the only metric that you care about is saving money. However, this doesn’t include the costs associated with a title transfer, sales taxes in the state you’re in, or the preference some people have for a larger car that can fit more people or cargo. We should also add that the Eco Explorer emits 4.9 tons of carbon into the atmosphere each year, while a Honda Civic emits 3.5 tons and Toyota Prius emits 2.7 tons, according to the EPA's Household Emissions Calculator. But no matter how you look at it, upgrading your vehicle is a cost-effective investment that pays for itself in a small amount of time.

In tough economic times, we need to find innovative ways to expand opportunities to bring the sustainability movement to everyone. The Sewanee Eco-Auto club drove small, affordable changes to provide a model that anyone can use to save some money and cut down on their impact.

All calculations rely on the AAA Daily Fuel Gauge Report’s national gas price average of $3.56 on August 23rd and the EPA’s estimation that the average car travels 12,000 miler per year.

How do you move the Planet Forward? Tweet us @planet_forward or contribute to the conversation with your own story.
randomness