Skip to main content
You are here: Home / The Chesapeake Bay 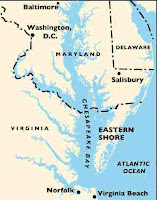 Virginia is one of a half dozen states and the District of Columbia that can claim the Chesapeake Bay watershed. NewsMay 12 from the Environmental Protection Agency about plans to clean up and restore the Bay to its natural beauty is welcome.

The important thing is to hold the plans of the EPA, the Department of Agriculture and other federal and state agencies that have pledged to improve the bay to the letter. A day before the announcement by Administrator Jackson, the Chesapeake Bay Foundation announced that it had settled a lawsuit against the EPA because it claimed that the government was slow to move on previous promises.
It's critically important to note that previous promises, commitments, etc., never really amounted to much. In fact, various federal administrations have been smiling and promising in front of cameras about restoring the bay since 1972 when the Clean Water Act was passed, and more specifically since 1983 when the governors of the watershed states of Pennsylvania, Virginia and Maryland met.
Depending on which advocacy group you ask, the results these past twenty years to clean and restore the Chesapeake are either dismal or abysmal.
The fact is, the Chesapeake Bay is a priceless natural resource, and the largest estuary system in the U.S. The streams and rivers that flow into it are the sources of fresh water for many residents in Virginia and Pennsylvania because the James, Potomac,Rappahannock and the Susquehanna. The Susquehanna provides about half of the fresh water that flows into the Chesapeake.
The bay and its sources are important. Period. Keeping them healthy is vital to the economy all along the Bay and its water sources.
Tags:
Water, Chesapeake Bay, epa
How do you move the Planet Forward? Tweet us @planet_forward or contribute to the conversation with your own story.